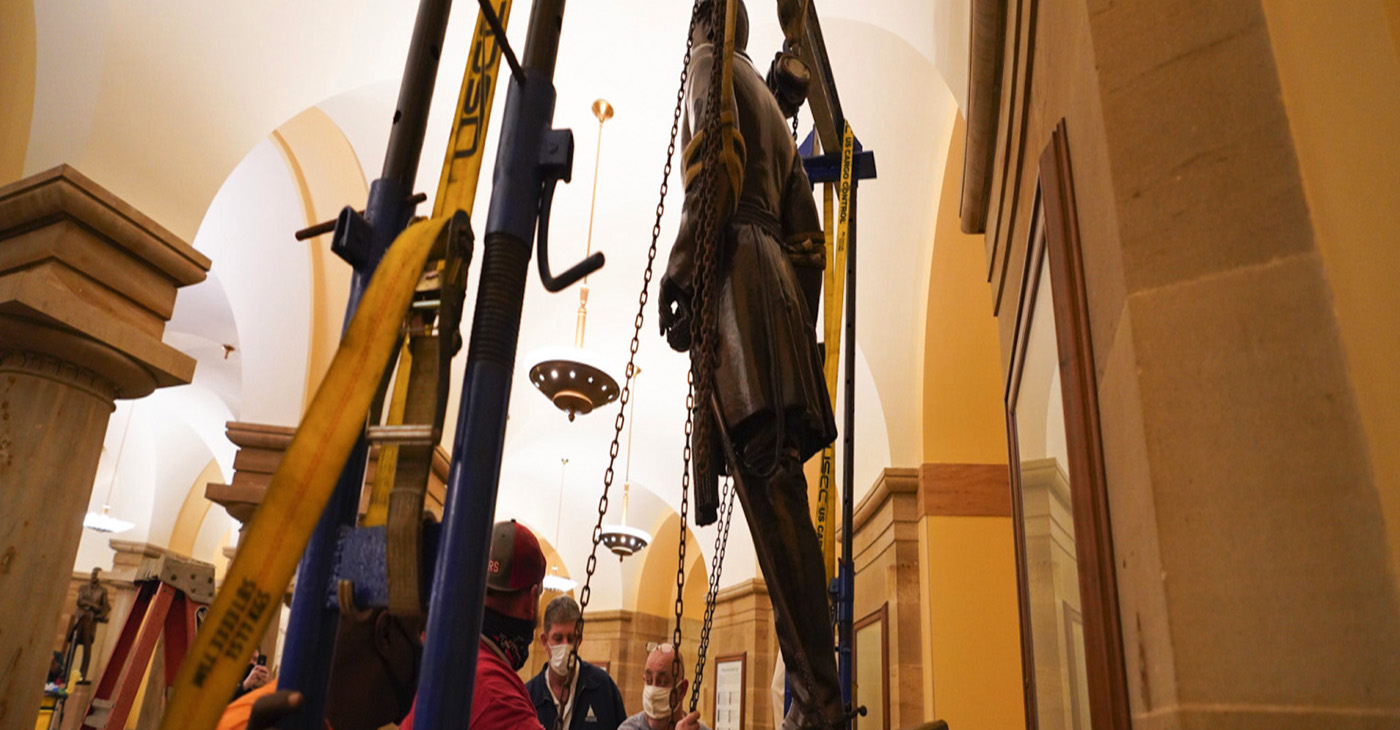 Protests and unrest in 2020 sparked by the police killing of George Floyd in Minneapolis, shined an even brighter spotlight on police brutality against African Americans.

The actions led to renewed calls to remove Confederate statutes and other racially insensitive structures.

Professional sports teams, including the Washington Football Team (formerly the Redskins) and Cleveland Indians announced they would change the monikers that many said are offensive to Native Americans.

Despite incremental progress, many still argue that unless much more is done to show that Black lives matter, removing racist monuments and changing racially insensitive team names and logos are just mere distractions.

In other words, those who spoke with the Black Press on the subject said they are eager to see more tangible results.

“Dismantling Confederate monuments and ridding sports teams and brands of racist imagery is not enough,” Marcos Martinez, the owner of the blog, http://www.themenwhobrunch.com, wrote in an email.

“For there to be racial progress, there need to be drastic improvements in failing schools in minority communities,” Martinez exclaimed.

He noted the many academic studies that prove education leads to better life opportunities.

“I know this firsthand because I lived in Brownsville, one of the most impoverished neighborhoods in New York,” Martinez remarked.

“Many of my [peers] who attended the schools in Brownsville didn’t graduate or didn’t pursue higher education. Most of them are either incarcerated or deceased due to gun violence.”

Darryl Smith, the founding partner for the firm, Florida Car Accident Law Team, said backlash remains from the dismantling of racist statues and the changing of names by some sports teams.

“The dismantling of the monuments and the rebranding of the teams’ racist imagery is not an end unto itself, and that should be remembered in the face of the expected backlash from those who really don’t want to see that imagery go away and make outsized noise about it,” Smith offered.

“We want to remember that these things are distance markers on the road to moving society toward a more inclusive future,” he continued.

“[Monuments] are inappropriate for spaces that are meant to represent all of the people in a particular jurisdiction as opposed to a select few. This is different from the concept of fighting systemic racism.”

Since the murder of Floyd in May, an estimated more than 100 Confederate symbols have been removed from around the country, including a Confederate Gen. Robert E. Lee from the U.S. Capitol that had represented Virginia for more than a century.

In July, the Washington Football Team announced it would drop the racist nickname, Redskins, after Pepsi, Nike, and FedEx received letters from investors calling on them to end their more than $620 billion sponsorship deals with the team.

The Cleveland baseball team later announced it would drop “Indians” as its nickname after the 2021 season.

“Changing sport teams names and tearing down statues are great PR moves by companies and politicians, but we’re never going to fix the problem until we educate the youth,” pronounced Jamie Hickey, the founder of https://coffeesemantics.com/.

“Racist parents that raise racist kids is the reason why we still have an equality issue in America. Kids aren’t born racist. They are raised to be racist,” Hickey declared.

“It’s the same as when people say pit bulls are mean. There is no such thing as a mean pit bull, only mean owners.”

“In 2021, rebuilding is likely to be a recurring theme. Black Americans want to reinforce the idea of rebuilding and developing communities in what we hope will be a post-COVID-19 society,” Eulo said.

“We want to see news, think pieces and human-interest stories that lend themselves to the idea of this being the time for Black innovation and excellence in a way that may not have been advisable before.”

This year needs to be a time “where we as individuals and a community find new ways to uplift ourselves after a year where we saw widely held beliefs, and long-standing conventions broken and cast aside in the wake of a global pandemic,” concluded Smith, of the Florida Car Accident Law Team.

“This is a time where finding ways to function outside the box can reap real benefits at a time when all bets appear to be off,” Smith demanded.

“We need to see examples of Black people and black communities thriving in the face of this unprecedented adversity, and examples of our political and economic influence being wielded for the betterment of Black Americans and the Black diaspora.”