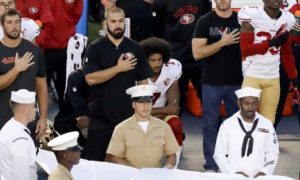 The uproar continues over San Francisco 49ner quarterback Colin Kaepernick’s decision to sit-down, rather than stand, during the playing of the National Anthem. Kaepernick said his decision was intended to protest the continued injustices being inflicted on Black people, including police brutality and killings. Though the negative tide has turned somewhat, his protest was initially met with a torrent of criticism from various quarters. He was called everything but a child of God for refusing to “honor America” and our men and women in the armed forces. The “love it or leave it” sentiment was very strong.

Frankly, I was infuriated by these reactions. It made my blood boil. I was already upset and had spoken about the fact that social media exploded with criticism of African American gymnast Gabby Douglas when she inadvertently forgot to put her hand over her heart when the National Anthem was played during the Medal Ceremony at the Olympic Games in Rio. So, when I took to the airways for my weekly radio show Vantage Point on WBAI, 99.5 FM on the Pacifica Network in New York. I unleashed a commentary which made the following points (listen to the commentary at www.ibw21.org).

There is no law which states that anyone must stand during the playing of the National Anthem or the Pledge of Alliance to the Flag. It is a strongly held “custom” and societal expectation that one stand, but no law which compels it. On the contrary, Colin Kaepernick has a Constitutional Right to express his views through protest. Freedom of speech is one of the most important cornerstones of this imperfect union. It is one of the avenues through which change can be galvanized. And, Colin Kaepernick has courageously chosen to exercise his First Amendment Right to point out longstanding, persistent injustices, “intolerable acts” that are being heaped upon African Americans who are supposed to be full citizens of this nation.

Most importantly, generations of African Americans have paid the price for Colin Kaepernick and any Black person to sit during the playing of a flawed Anthem replete with hypocrisy. Every time I hear the words “that our Flag was still there” in the Anthem, I’m filled with anger/outrage. When the War of 1812 was fought some 3.5 million Africans were still enslaved and the 500,000 or so “free” Blacks could not vote and were subject to racial discrimination and violence. “Our Flag?” We didn’t have a Flag. For Black folks, singing that line and most of the Anthem is ludicrous!

That notwithstanding, Blacks have spilled blood to protect and defend America even when America refused to protect and defend Black people. From Crispus Attucks, who died in the initial skirmish of the American Revolution, to the hundreds of “freedmen” whom George Washington reluctantly armed to fight in the battles of Bunkers Hill and Breed Hill, to the thousands who took up arms to fight for our own freedom in the Civil War, Black people have fought, bled and died aspiring to be free in a nation which repeatedly rewarded our military service with a failure to protect and defend us as citizens. We have been among America’s most patient patriots.

Thousands of Black troops went off to fight Kaiser Wilhelm during the First World War to save democracy, only to return to the United States to be gunned down in the streets in their military uniforms in the “bloody red summer of 1919.” We fought against Hitler and Tojo in the Second World War to once again return to an America where we were not free. Soldiers fresh off the battlefields faced humiliation, intimidation, lynching/murders and police violence in the segregated South and “dark ghettos” in the North. Indeed, the hypocrisy of fighting for freedom and democracy abroad while being denied “freedom and justice for all” at home helped to fuel the civil rights, human rights, Black Power and Nationalists/Pan Africanists movements which have painstakingly pushed a reluctant nation toward a more perfect union. Up through the Korean Conflict, Vietnam, Iraq and Afghanistan, Black soldiers have bled and died in every America war.

We have paid the price for Colin Kaepernick to stand or sit, kneel, recognize or ignore a flawed Anthem and Pledge, particularly as his protest continues to illuminate the killing of Black men and women by the police in the streets of this country. Indeed, Frederick Douglas might well have whispered into the ear of Colin Kaepernick, “Right on Brother. What to Black people is your Anthem and your Flag!” Or Kapernick may have been inspired by an “American icon,” Jackie Robinson who reflected in his autobiography on standing for the Flag as he carried the weight of the race on his shoulders as the first African American to play Major League Baseball: “As I write this twenty years later, I cannot stand and sing the anthem. I cannot salute the flag; I know that I am a black man in a white world.”

In many respects Jackie Robinson, a World War II veteran, was/is symbolic of all the men and women, the patient patriots, who paid the price for Colin Kaepernick to sit or kneel during the playing of the National Anthem and the salute to the Flag. Africans in America and people of conscience and goodwill should resolve to stand with and defend him in his righteous pursuit to end the oppression and injustice of Africans in America. No struggle, no progress!