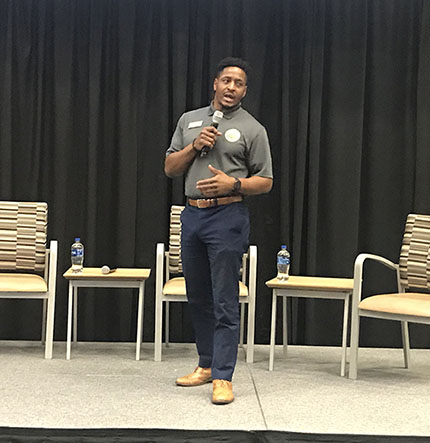 Dr. John Montgomery kicked off Humana’s 4th Annual Bold Goal Town Hall meeting, where the community discussed progress to-date on improving the health of Jacksonville residents and a new military population health initiative in Jacksonville. Health and well-being company Humana hosted the 4th Annual Bold Goal Town Hall, last week at the University of North Florida. Since announcing its Bold Goal aimed at making the Jacksonville community 20 percent healthier by 2020 and beyond, the Jacksonville community has enthusiastically embraced the Bold Goal engaging in numerous initiatives and partnerships aimed at improving the health of Jacksonville residents.
At the event, Humana Military revealed its plans to integrate a population health strategy in the Military Community in Jacksonville, one of two communities selected nationwide. Specifically, the Office of Population Health will aim to improve loneliness, food insecurity and tobacco/alcohol use among the 140,000 TRICARE beneficiaries in the Jacksonville area. With 90% of military spouses reporting feeling lonely, and 20% of households served by Feeding America including at least one member who has served in the military, Humana believes the collaborations it will launch in Jacksonville will greatly benefit this population.
Shown is Mikhail A. Scott, Senior Projects Consultant Food, Nutrition and Wellness for Commissioner Nikki Fried, Florida Department of Agriculture Consumer Services and Dr. Montgomery, Humana Bold Goal co-chair.