“What if black women, it turned out, really always have been at the forefront of the struggles over American women’s voting rights, and what if we as a nation are just catching up to that?”

That is the question posed by Martha S. Jones, one of the many historians now rewriting the history books on the role black women played in the women’s suffrage movement.

“Historians of African American women, like me, on the one hand have known many parts of this story for a very long time,” Jones, a history professor at Johns Hopkins University, told “Good Morning America.” “Like with a lot of subjects, how we get that from our classrooms and our professional journals and our books and into the popular mind is always a challenge.”

Historians like Jones say black women played a crucial role in getting women the right to vote and run for office; they just didn’t do it alongside white women like Elizabeth Cady Stanton and Susan B. Anthony, who for decades have been idolized as the movement’s leaders.

“Black women are present and they are doing public work and they are deeply engaged in questions around women’s rights,” Jones told “Good Morning America.” “They simply just are not doing that work in the organizations that call themselves suffrage associations.”

“[The associations] were not an easy or welcoming or comforting or hospitable place for African American women,” said Jones, who delves into the divisions in a new book out this fall, “Vanguard: How Black Women Broke Barriers, Won the Vote, and Insisted on Equality for All.” 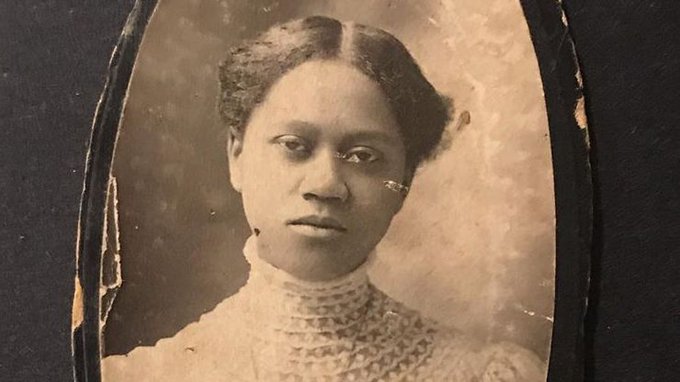 Black women were speaking out about women’s rights at the same time the women’s suffrage movement was unfolding in the mid-1800s, but because of their race they were not equally heard. Black women also did not get white women’s support as they fought for other equality measures, like the 14th and 15th amendments, which granted former slaves citizenship rights and gave black men voting rights.

“We know that even during major marches at the height of getting the 19th Amendment passed, black women were segregated,” said Nancy G. Abudu, deputy legal director of voting rights at the Southern Poverty Law Center (SPLC). “And white women weren’t there, really, to promote anti-lynching and other campaigns important to black women.”

Stanton and Anthony left black women’s efforts out of their influential “History of Woman’s Suffrage,” which became the historical account of the movement. As a result, black women were later left out of history books too.

“To include the ways black women were working, you have to be more creative and look beyond the white suffrage groups,” said Kimberly Hamlin, author of “Free Thinker: Sex, Suffrage, and the Extraordinary Life of Helen Hamilton Gardener” and associate professor of history at Miami University. “Look at the black women’s club movement and the temperance movement, where you see black women all along are working not just for women’s right to vote but for the civil rights of African Americans.”

Black women’s clubs like the National Association of Colored Women were hotbeds of political activism, historians say. Some of those clubs are just now unearthing the incredible details of the roles their own members played in gaining women the right to vote.

“It’s an untold story,” said Beverly Carter, a retired attorney and the historian for Dubois Circle, a Baltimore-based black women’s club founded in 1906. “And it’s a totally fascinating story.”

In spending the past five years going through every note and document in the club’s history, Carter discovered the club had nearly one dozen active suffragists who held suffrage meetings in their homes, spoke publicly and joined marches.

“What has surprised me is how much involvement that just this one club had,” said Carter. “I’m trying to bring to light the monumental tasks that these women did, especially with the odds against them.”

And once the 19th Amendment passed in 1920, the work of black women, for the benefit of all women, was not done. They had to continue their fight for full voting rights all the way to 1965, with the passage of the Voting Rights Act that prohibited racial discrimination in voting.

The hard work done by black women suffragists left a mark that is still being felt in politics today. In the 2018 election, 55% of eligible black women voters cast ballots, six percentage points above the national turnout, according to the U.S. Census Bureau.

Their work also continues today in the effort to ensure every person has an equal right to vote. It can be seen in the work of women like Stacey Abrams, who last year launched Fair Fight, a multimillion-dollar initiative aimed at increasing voter protection efforts, after losing the Georgia gubernatorial race in 2018.

“You can’t explain Stacey Abrams by the story of Susan B. Anthony and Elizabeth Cady Stanton,” said Jones. “[Abrams] doesn’t come out of nowhere and she herself says this, that she comes out of a tradition of African American women’s activism and politics.”

Here are six black women who were at the forefront of the tradition of African American’s activism, specifically in gaining women the right to vote.

Wells was born enslaved in Mississippi in 1862 and went on to become a teacher, a mother of four, and a pivotal figure in the anti-lynching movement, famously confronting white suffragists who did not denounce lynching.

She was also at the helm of the black women’s organizations that were at the root of the suffrage movement. She helped found the National Association of Colored Women and later the Alpha Suffrage Club in Chicago, which organized women to help elect candidates, according to the National Park Service (NPS). 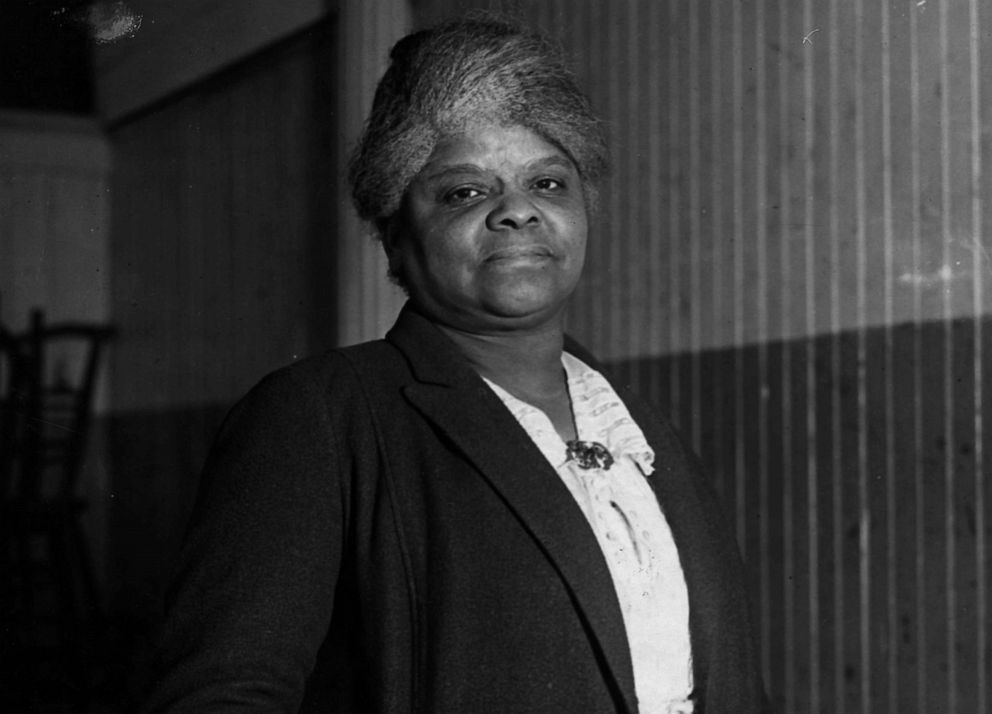 “The club movement, which is organized under the umbrella of The National Association of Colored Women, is probably the closest analog we have to a suffrage organization led by black women,” said Jones.

Wells notably protested the segregation of the suffrage movement at the 1913 Suffrage Parade in Washington, D.C. Wells was asked with other black women to march at the back of the parade, but she refused.

Instead, she waited for the white women from Chicago to march by in the parade and then joined the march, according to the NPS.

Dr. Bethune was a South Carolina-born child of former slaves who went on to become a teacher and founder of Bethune-Cookman University in Daytona Beach, Florida. 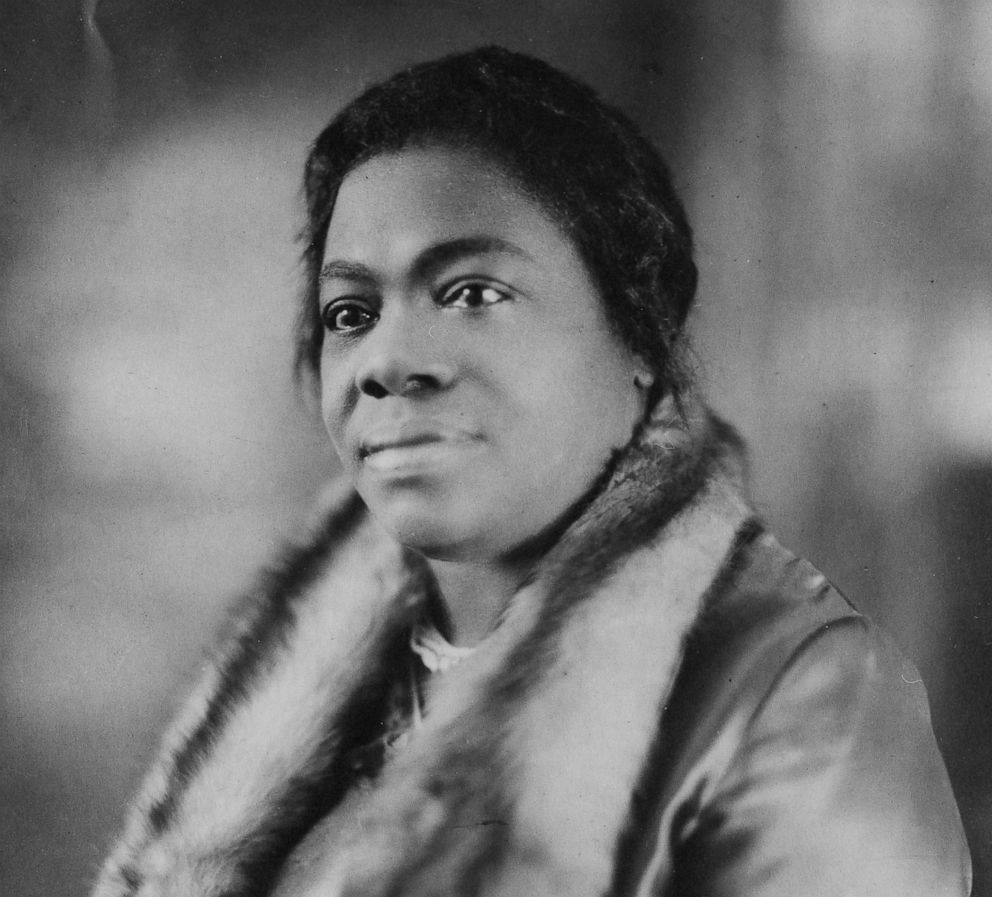 In addition to fighting for black women’s equality, Bethune was at the forefront of making sure the contributions of black women would be remembered.

“She recognized the importance of preserving historical records about the rich and diverse contributions African American women have made to the American culture, according to the NPS, which runs the Mary McLeod Bethune Council House, a National Historic Site in Washington, D.C. “She envisioned a permanent and growing collection which would be used by historians and educators.”

“She uniquely understood the significance of maintaining an archive of black women’s history and the impact it would have on future generations,” according to NPS, which notes Bethune was the first female president of the organization now known as the Association for the Study of African American Life and History (ASALH).

Terrell was the daughter of one of the South’s first African American millionaires, who went on to earn a bachelor’s and master’s degree from Oberlin College and become a teacher.

She was active in the anti-lynching movement and went on to focus on civil rights and advancement for African Americans. Her own words, “Lifting as we climb,” became the motto of the National Association of Colored Women (NACW), and she served as the group’s first president, according to Hamlin. 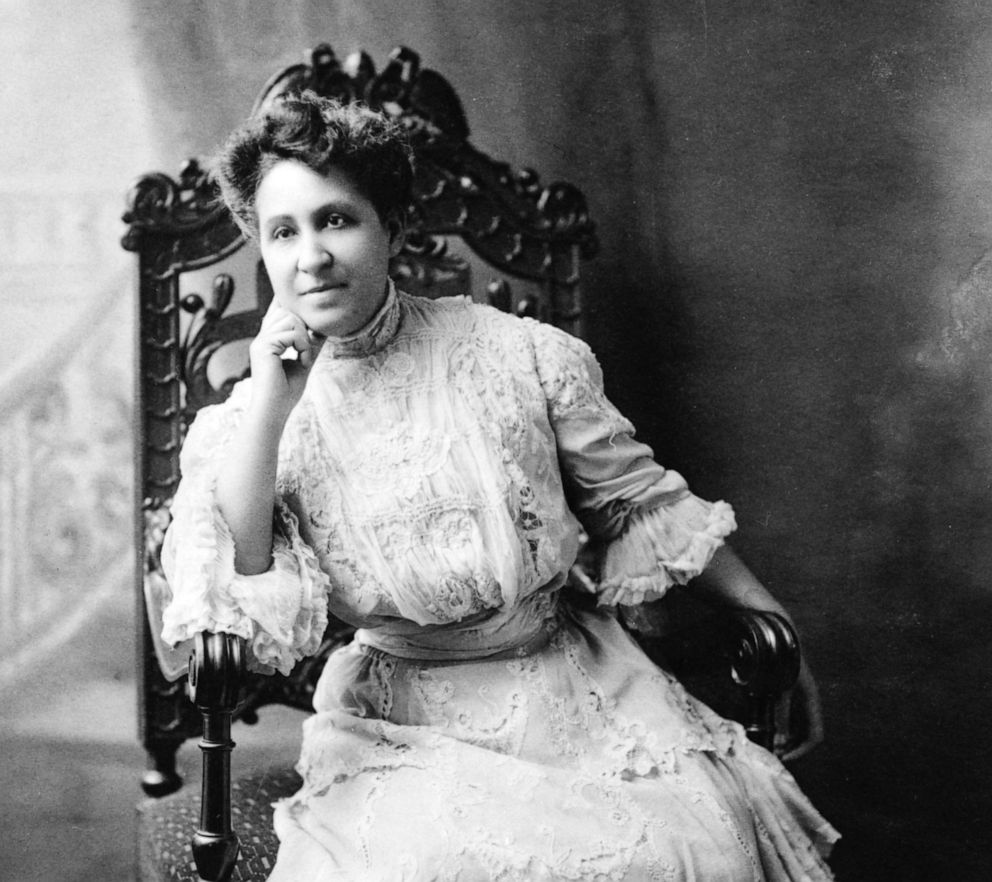 “Of the black women trying to keep the promise of the 15th Amendment and universal suffrage alive, Terrell stood at the forefront,” said Hamlin. “And of the black women who were occasionally invited to speak at the white suffrage meetings, Mary Church Terrell was the most prominent.”

“Unfortunately, white suffrage leaders didn’t always listen to what she said, but she would be invited and her speeches remain an important part of the historical record, especially ‘The Progress of Colored Women’ from 1898,” she said.

Brown was born in 1849 to former slaves, and went on to become a professor at her alma mater, Wilberforce University in Ohio.

She became an activist for women’s equality and a noted speaker and writer who played a central part in the founding of the National Association of Colored Women (NACW), according to Wilberforce University, a historically black college and university (HBCU). 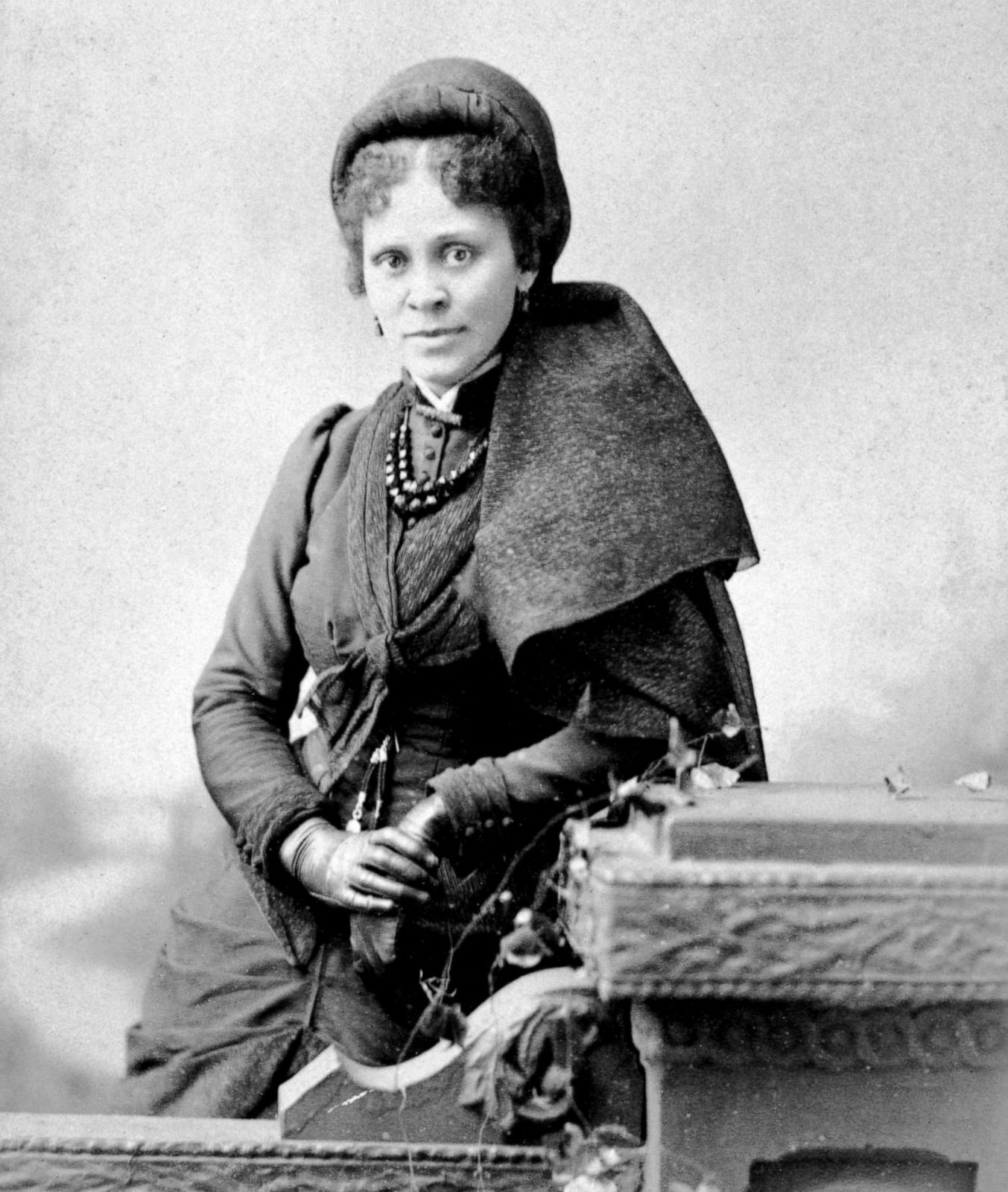 Educator, writer and activist Hallie Quinn Brown poses for a portrait, circa 1880s.

“I believe there are as great possibilities in women as there are in men … We are marching onward grandly … I repeat, we want a grand and noble womanhood, scattered all over the land,” Brown said in 1889, according to Jones.

Brown’s 1926 collection of biographical essays, “Homespun Heroines and Other Women of Distinction,” told the stories of 60 African American women.

“Women like Brown were making history themselves and simultaneously trying to write it down and lift others up,” said Hamlin.

Harper is described by Hamlin as an “early-on badass” who wrote one of the first novels published by an African American woman, “Iola Leroy,” and gave speeches in the South advocating for voting rights for all, including black women. 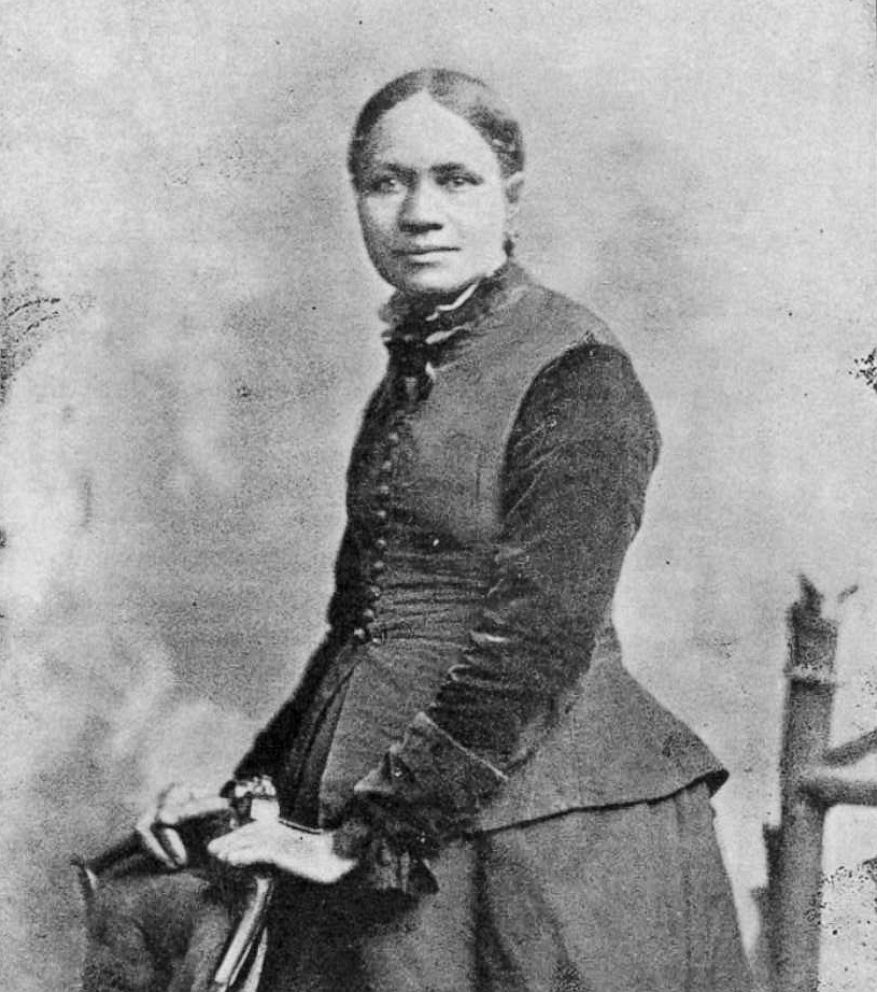 Frances Ellen Watkins Harper is pictured in a portrait, circa 1898.

The Baltimore, Maryland, native first started speaking about the rights of African Americans as early as the 1850s and was one of the founders of the American Woman Suffrage Association in 1869, according to NPS.

In 1866, she delivered her a powerful speech on racial inequities at the Eleventh National Women’s Rights Convention in New York City, saying, “You white women speak here of rights. I speak of wrongs.”

“I do not believe that giving the woman the ballot is immediately going to cure all the ills of life,” Harper said at the convention, which also featured white suffragists like Stanton and Anthony. “I do not believe that white women are dew-drops just exhaled from the skies. I think that like men they may be divided into three classes, the good, the bad, and the indifferent. The good would vote according to their convictions and principles; the bad, as dictated by preju[d]ice or malice; and the indifferent will vote on the strongest side of the question, with the winning party.”

Truth, born Isabella Baumfree, died in 1883, well before women gained the right to vote in the U.S., but she was a forebearer of the fight for black women’s equality.

A former slave, Truth traveled the country as an advocate for the anti-slavery movement and later women’s rights. 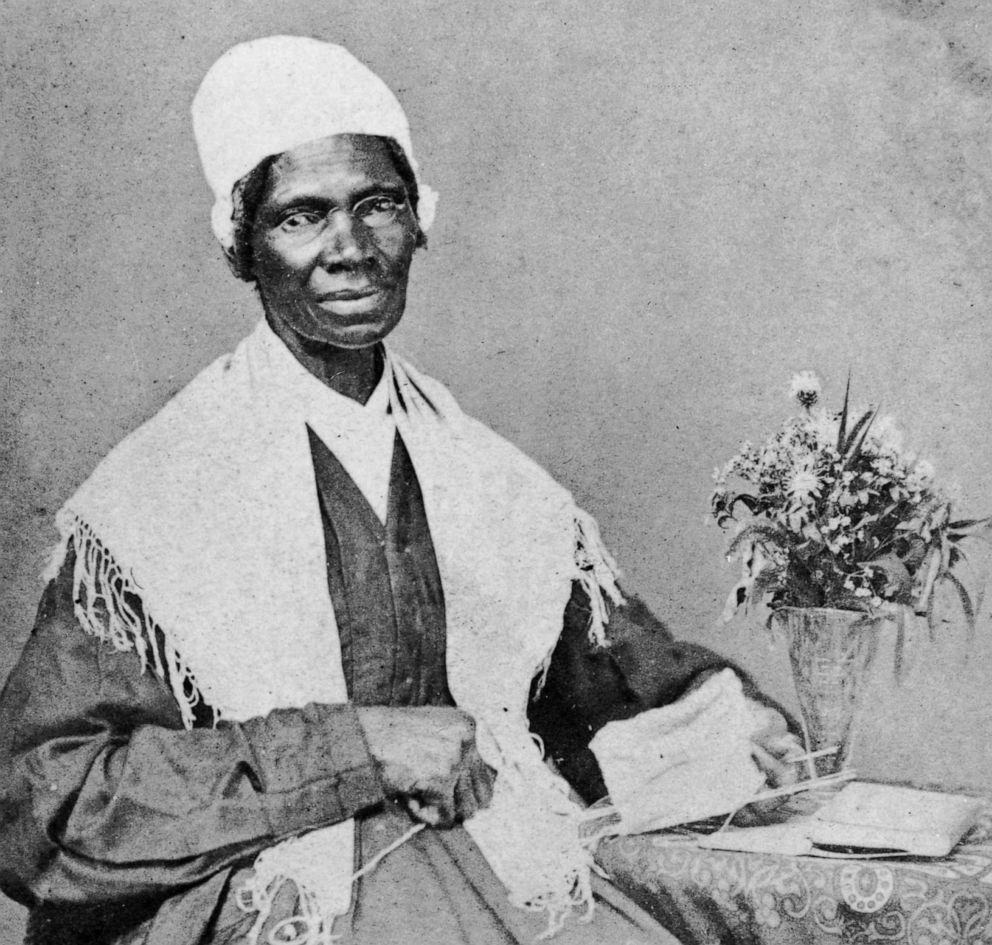 Through her activism, Truth “broadened the definition of ‘reformer’ beyond the white, educated, middle-class women who primarily made up the women’s movement,” according to the Sojourner Truth Memorial Committee, which erected a statue of Truth in Florence, Massachusetts, where she lived in the 1840s and 50s.

“During the time she lived in Florence and afterward, Truth made a living as a public speaker, successfully brought cases to court, marched and performed sit-ins for reform causes, petitioned Congress, met with presidents, and tried to vote in the 1872 election,” according to the committee.