By William C. Hines – When I was a young boy growing up in Jacksonville, there were two Black High schools – Stanton High (Blue Devils) and the Matthew W. Gilbert (Panthers).

These men helped to develop one of the most important football rivalries and social events of the 1940’s, 50’s and 60’s. Under their leadership, they were able to encourage the all white city recreation department to allow Blacks to play football in the historic Gator Bowl, now TIAA Field. The annual football game and social events surrounding it remained the social happening for many years.

By the mid 70’s, the number predominately of black high schools had been diminished from seven to two and many of the Black history was celebrated at those schools were lost.

The African American Coaches, Game Officials and Athletic Associations (AACGOAA) were established to assure the perseverance of Black athletics and cultural achievements in Duval County. The association was the idea of Coaches Earl Kitchings, Jimmy Johnson, Dr. Alvin White and many others. The coaches would meet on the second Friday of each month to eat breakfast and enjoy fellowship. Naturally, discussions would follow about sports and other topics important to the community.

Each part of the city had a recreational park and leaders that helped develop our athletes and youth.  Every school had outstanding coaches and athletes. Those recreational leaders played a major role in developing the association.

AACGOA meets every second Friday of the month at Joint Heirs Church at 150 Clark Rd.  Next on the agenda is the celebration of the achievements and accolades of the AACGOAA at the 9th annual awards banquet to be held February 2019. Shown are legendary coaches Nathanial Washington, Jimmie Thompson and Dickie Robinson. To purchase the historic African American Coaches, Game Officials and Athletic Associations (AACGOAA) Legends Souvenir Book contact William Hines at (904) 765-3728. 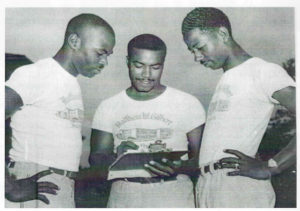