In a state budget meeting, the state’s Chief Minister Jai Ram Thakur announced that cannabis produced in the state is of high quality, and there is enormous potential to undertake its controlled cultivation.

While this announcement is a welcome move considering years of political struggle in India for cannabis legalization, the lack of comprehensive laws and the cultural taboo around cannabis might be the immediate hurdles.

“Cannabis extract is used in manufacturing medicines for the treatment of cancer and Alzheimer’s,” Sunder Singh Thakur, a legislator from the state’s Kullu district, told Zenger News. He has advocated the legalization of cannabis in the state for many years.

“It will generate employment opportunities. The state needs it now more than ever because of the pandemic-related job loss.” 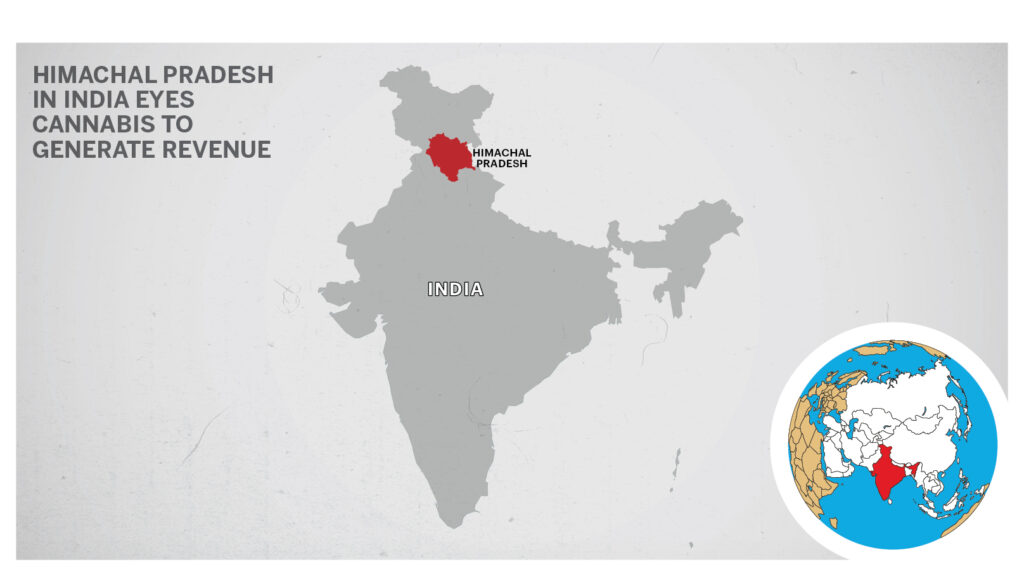 The Kullu-Manali district in the state of Himachal Pradesh attracts 3.5 million domestic and foreign tourists annually. Apart from its scenic mountains and gushing streams, some of these tourists also visit the state for its cannabis resin product known as hash, hashish, charas, or bhang.

Hash is a preparation made from the resin of the buds of the cannabis plant. Hashish, hash, or hash oil is the most potent form of marijuana due to its concentration levels, with a pound of marijuana yielding just an ounce or two of hash or hash oil.

Himachal Pradesh had a hashish output of 100-150 tons in 2018, as per a research paper on cannabis cultivation globally.

Under India’s Narcotic Drugs and Psychotropic substance Act, 1985, cannabis cultivation, possession, and use in any form is illegal. However, the statute includes a provision allowing individual states to “permit and regulate” not only their cultivation but also their possession, transport, sale, and purchase, among other things, subject to certain conditions.

This provision paved the way for the recent announcement of the controlled cultivation of cannabis in Himachal Pradesh.

Thakur said the government has not yet discussed “the legal process of obtaining licenses for cultivation”.

“It is a long process because several thousand hectares of land in the state is already under illicit cultivation,” he said. “The details regarding the cannabis varieties suitable for cultivation and the research and development behind this are still under process.”

Himachal Pradesh is the third Indian state after the northern state of Uttarakhand and the central state of Madhya Pradesh to legalize cannabis cultivation. Uttarakhand legalized the cultivation of cannabis plants in 2015. Only the varieties with less than 0.3 to 1.5 percent of THC (psychoactive ingredient used for recreational purposes) concentration can be grown.

The western Indian state of Gujarat legalized bhang in 2017 by removing it from the list of “intoxicating drugs” covered under Section 23 of the Gujarat Prohibition Act.

As India slowly accepts the industrial and medicinal benefits of cannabis, many hemp-related start-ups have mushroomed in the state.

Hemp, or industrial hemp, is a variety of the cannabis Sativa plant species explicitly grown for industrial use.

“The legal aspect of what cannabis varieties can be grown is still very blurry since there is not much research done on the varieties of cannabis naturally occurring in India,” said Hardik Jain, chief financial officer, Gohemp Agroventures.

Jain’s start-up makes organic construction blocks using the fiber part of hemp, which is suitable to build all kinds of buildings with a concrete/meta/timber load-bearing structure and a lime-based mortar.

Bombay Hemp Company, another such start-up, procures hemp from farmers in Indian states where its cultivation is legalized to convert hemp into fiber to make textiles and fabrics.

Jain explains that the legalization wave is just beginning to hit the country, and there is a lot of chaos related to what kind of plants can be grown and what can’t.

“There is just not enough research and development when it comes to cannabis in India because it was banned for so long. So, we don’t know the extent of its uses or its medical benefits; it’s a huge untapped resource in our country,” Jain said.

Cannabis has deep cultural and mythological roots in India. Shiva, one of the primary gods in the Hindu religion, is commonly associated with the consumption of cannabis.

While India banned the use of cannabis in 1985 with the introduction of the Narcotic Drugs and Psychotropic Substances Act, many observers saw the move as “India buckling under the pressure of the U.S.”, which was fighting a protracted war against drugs since the 1940s.

Things, however, have begun to look up particularly after 27 of the 53 members of the UN Commission on Narcotic Drugs — including India, the U.S., and most European nations — voted “yes” on the motion to delete cannabis and cannabis resin from Schedule IV of the 1961 Convention.

The Schedule IV of the 1961 Convention is an international treaty to prohibit the production and supply of specific drugs and drugs with similar effects except under license for specific purposes, such as medical treatment and research.

Despite the ban, cannabis consumption in India has reached behemothic levels.

A 2018 study reveals India’s national capital New Delhi and financial capital Mumbai were the third and sixth largest consumer of cannabis, respectively, in the world.

The situation on the ground is yet to pick up.

“As of now, in Uttarakhand, we only talk about the hemp fiber and the seeds,” Kabir Singh, board member at Uttarakhand entrepreneurial development, Uttrakhand Gramya Vikas Samiti, told Zenger News.

“There are no legal actions taken to see the other varieties. There are no government meetings or discussions related to the expansion of the research in this field.”

Singh said that with the increasing popularity of hemp products, various state governments are looking at the employment growth and money-making aspect of it, pushing for the legalization of the plant.

“It’s a long process. A lot of social stigmas attached to the cannabis plant itself make the process lengthier. But in time, we hope to reach the full potential of cannabis cultivation in India,” he said.

In the U.S., 24 states have fully legalized cannabis, both for medical and recreational use. However, the laws differ from state to state about quantities and possession.

The global legal marijuana market size is expected to reach $84 billion by 2028, as per a report by Grand View Research.

India is slowly following the suit of legalization after understanding the potential and employment-related benefits of cannabis. However, the lack of a proper legal framework related to cannabis cultivation remains an overall hindrance.