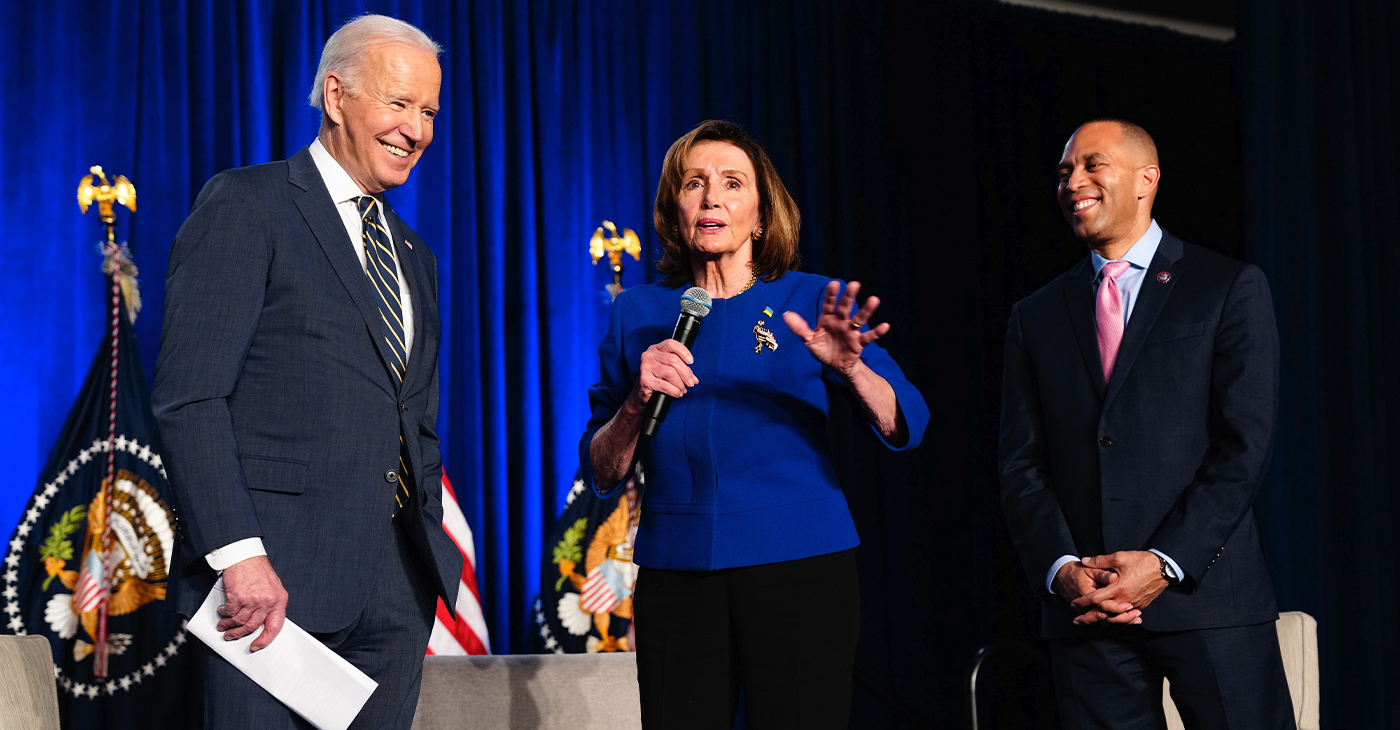 NNPA NEWSWIRE — By Stacy M. Brown, NNPA Newswire Senior National Correspondent – Jeffries said he hopes to find common ground with the G.O.P. where possible. He takes over the reins from long-time Speaker Nancy Pelosi (D-Calif.). The 52-year-old leads a changing of the guard for Democrats, a party long headed by its most senior members, including Pelosi, 82, and South Carolina’s James Clyburn. The new leaders include Massachusetts Rep. Katherine Clark, 59, and Pete Aguilar, 43, of California.

Democrats in the U.S. House of Representatives have elected New York Rep. Hakeem Jeffries as their party leader.

The congressman, who once quoted the late Notorious B.I.G. during one of former President Donald Trump’s impeachment hearings and has maintained a vow to oppose Republican extremism, becomes the first Black American to lead a major political party in Congress.

Jeffries said he hopes to find common ground with the G.O.P. where possible.

He takes over the reins from long-time Speaker Nancy Pelosi (D-Calif.).

The 52-year-old leads a changing of the guard for Democrats, a party long headed by its most senior members, including Pelosi, 82, and South Carolina’s James Clyburn.

The new leaders include Massachusetts Rep. Katherine Clark, 59, and Pete Aguilar, 43, of California.

Clark takes over for Clyburn, 82, as Democratic whip, while Aguilar replaces Steny Hoyer, 83, of Maryland.

“It’s a solemn responsibility that we are all inheriting,” Jeffries remarked.

“And the best thing that we can do as a result of the seriousness and solemnity of the moment is lean in hard and do the best damn job that we can for the people.”

While Democrats will represent the House minority, “they will have a certain amount of leverage because the Republican majority is expected to be so slim and [presumptive House Speaker] Kevin McCarthy’s hold on his party fragile,” noted Lisa Mascaro of the Associated Press.

“The House’s two new potential leaders, Jeffries and McCarthy, are of the same generation but have almost no real relationship to speak of,” Mascaro wrote.

“The Democrat is known for leveling political barbs at the Republican from afar, particularly over the G.O.P.’s embrace of former President Donald Trump.”

Jeffries served as a House manager during Trump’s first impeachment and dropped a few bars from the late Notorious B.I.G. to underscore how prolific the former president’s crimes appeared.

“And if you don’t know, now you know,” Jeffries said in the quintessential mic drop moment. “We’re still working through the implications of Trumpism and what it has meant as a very destabilizing force for American democracy.”

Washington insiders – and many outsiders – have argued for some time that old-school Democrats needed to give way to a younger generation of leaders.

The NNPA is the trade association of 235 African American-owned newspapers and media companies.

“Congressman Jeffries exemplifies the transformative leadership and vision to strengthen American democracy for all who stand for freedom, justice, equality, and equity,” Chavis asserted.

Jeffries said Democrats must continue to work together towards meaningful progress.

“The thing about us is that while we can have some noisy conversations at times about how we can make progress for the American people, what we’ve seen is that under the leadership of Speaker Pelosi, Steny Hoyer, Jim Clyburn, is that we’ve constantly been able to come together,” Jeffries insisted.

Maxwell Frost, the 25-year-old from Florida, perhaps best summed up the changing of the guard in the Democratic party.

Frost won the election this month as the first member of Generation Z to win a seat in the U.S. House of Representatives, where he’ll serve under Jeffries’ leadership.

“I think it’s important that we have a government that looks like the people,” Frost stated.

The change in Democratic leadership comes at a time when their Republican counterparts have seized control of the House, weaponized the U.S. Supreme Court, gerrymandered congressional maps throughout the country, and have used their pulpits to spark and spread messages of hate and division.

“Americans have tended to see younger candidates as less qualified to serve in office relative to a middle-aged or older candidate,” Damon Roberts, a political scientist at the University of Colorado Boulder, told CBS News.

“People do seem to be pretty positive toward having a younger representative,” Roberts asserted.

Stressed and sickened by thoughts of their rights and democracy slipping away, young Americans across gender, racial, geographic and education lines banded together last week to help save the Democrats from what many foresaw as a sizable midterm defeat, John Della Volpe, the director of polling at the Harvard Kennedy School Institute of Politics, wrote in an editorial.

“In the eyes of many young voters, this is how America meets its destiny: when the passion of the grassroots melds with the power of institutions to forge progress,” Della Volpe asserted.

“As political analysts methodically review the numbers after an election for the ages, anyone interested in the winning formula for 2024 should closely examine those between the ages of 18 and 39.”

Gerald Warburg, a professor of public policy practice at the Frank Batten School of Leadership and Public Policy, noted that turnover in the youth-challenged leadership of the Democratic House and Senate caucuses had frozen for decades.

Until now, all Democratic legislative leaders were over 70 years of age.

Warburg contended that both parties might now welcome the opportunity to pass the torch to a new, post-baby boomer generation with fresh ideas.

Pelosi and Democrats, Warburg said, “had the courage to step back, making way for new leaders and new ideas.”