By Kyle Rowland – On Friday, six weeks after the event was publicly announced, Inverness Club will host the LPGA Drive On Championship — the tour’s first tournament since February after the coronavirus pandemic put professional golf on hold.

It’s not the first time the famous Dorr Street course has been called on with little notice. Rewind 30 years to Birmingham, Ala., and one of golf’s most infamous quotes, which set off a domino effect resulting in Inverness hosting the 1993 PGA Championship.

All it took was nine words uttered by Shoal Creek Country Club founder Hall Thompson in 1990 for golf’s racist, stodgy past to reach the front pages of newspapers nationwide.

“We don’t discriminate in every other area except blacks,” Thompson told a reporter from the Birmingham Post-Herald, igniting a firestorm two months before the course would host the PGA Championship.

Thompson’s remark sparked protests, corporate sponsors pulled more than $2 million in television advertising, and the Southern Christian Leadership Conference threatened to picket the tournament. The 1990 PGA Championship was uninterrupted, but it became a flashpoint in modern golf’s relationship with exclusionary private clubs and diversity.

An apology from Thompson and Shoal Creek’s admittance of a black member shortly after the original comments helped to quell rising anxieties. Golf’s major stakeholders made swift changes.

The PGA of America, United States Golf Association, and PGA Tour established policies that barred discriminatory clubs from hosting their tournaments. Aronimink, outside Philadelphia, and Oak Tree, in Edmond, Okla., were scheduled to host the 1993 and 1994 PGA Championships, but each course withdrew — Aronimink said it wouldn’t have time to admit a black member and Oak Tree’s all-male membership balked at any changes.

“If we didn’t have the waiting list, there would be no problem at all,” Aronimink’s attorney John Brooks told the New York Times in 1990. “Our members are of the consciousness that we should take black people into the club. But 1993 is a little tight for us. In order to ensure the parity and fairness of our waiting list, we decided we couldn’t deviate or vary.”

Three decades later, golf has made major strides in the area of diversity.

The LPGA Tour has been at the forefront, counting members from all around the globe. Five black players have advanced to the top women’s tour since 2011 — Shasta Averyhardt, Cheyenne Woods, Sadena Parks, Ginger Howard, and Mariah Stackhouse.

“My personal experiences have been overwhelmingly welcoming,” said Stackhouse, who, along with Woods, is in the LPGA Drive On Championship field at Inverness this week. “As I grew in the golf world and in the competitive world of golf, the best golfer in the world was black. I think Tiger’s success and dominance definitely helped me not be seen as something unusual in this sport. It definitely positively impacted my experience in the golf world. I think that it’s been proven through research and experience over the years that successful representation is huge to allowing you to feel included in your environment. Tiger’s presence played a role for me and other black competitive golfers my age.” 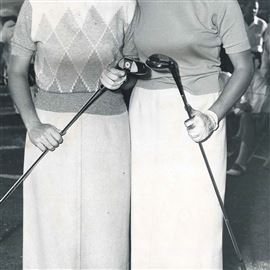 While progress is undeniable, statistics from the National Golf Foundation show the sport could still improve in regards to African-American participation, which accounts for just three percent of recreational golfers, one percent higher than 1990. The sport’s high cost — equipment, greens fees, lessons — is continually used as a talking point in why access is limited to black youths.

The so-called Tiger Effect was supposed to boost minority participation in the sport, but his presence as a global phenomenon has had a negligible impact. Programs like the First Tee and the World Golf Foundation’s Diversity Task Force have been created to help spur play among African-Americans and other minorities.

On Monday, the LPGA awarded the First Tee of Lake Erie with a $5,000 Renee Powell Grant, a program that helps assist black girls by creating partnerships and outreach opportunities. The LPGA will also provide access to their cultural sensitivity training, assistance with connecting the First Tee with a local youth organization serving black girls, branded items and giveaways for the Girls Golf Experience, lesson plans for the program, and at least one LPGA headquarters representative to assist with Girls Golf Experience event planning.

“Every day, our world becomes more diverse and it’s important to react in a way that is inclusive, respectful, and accepting,” said Amanda Liford, site director of LPGA*USGA Girls Golf at the First Tee of Lake Erie. “Golf has the ability to help girls expand their horizons and give them opportunities that they would not have otherwise. The LPGA*USGA Girls Golf program does an amazing job at providing a place where girls can come together, make friends, have fun, and learn golf along the way.”

Powell, in a statement to the LPGA Tour, said everyone needs to “do a little more to change the culture of what golf is all about, in particular growing our Girls Golf programs and being very inclusive.”

An ugliness for women of color is still prevalent, though, as evidenced by a high-profile Pennsylvania court case involving five black women who were asked to leave their club for allegedly playing too slow. The Pennsylvania Human Relations Commissions sided in their favor that there was probable cause of racism and sexism.

Augusta National Golf Club, home of the Masters, which didn’t have a black member until 1990 and a female member until 2012, has become a prominent voice in growing the game among women and minorities, organzing the Augusta National Women’s Amatuer, Asia-Pacific Amateur, Latin American Amatuer Championship, and helping to found the Drive, Chip, and Putt Championship.

Amid the Shoal Creek controversy, David Fay, the USGA’s executive director, told the New York Times, “Sports has often been an instrument of social change. This is another example.”

His message rings true today in the senseless deaths of George Floyd and Breona Taylor, which caused an avalanche of social unrest nationwide. Professional sports, including golf, have lent their support to the Black Lives Matter movement. The PGA Tour held a moment of silence in Floyd’s honor during all four rounds of its first tournament in June.

“I can’t fathom the reason why anybody would treat somebody differently just the way you look or they sound or what you believe in,” said Jon Rahm, the No. 1 player in the world and an outspoken supporter of BLM. “We’re all the same. We’re all human beings, and we should all be treated the same way.”

Stackhouse, a product of Stanford University, authored a poignant letter on her social media accounts, detailing her anger, frustration, and sadness. A couple of months later, her feelings remain unchanged as she navigates how to best use her platform.

“I use my voice and share my opinion when I feel like it’s time to take a stand,” Stackhouse said. “But I’m not an activist in the sense of I’m not organizing protests and movements. When I’m reading and allowing other people to educate me on certain subjects, I’m not going to make my voice the center because I haven’t studied it. There’s a time when it’s important to use your voice and make it clear where you stand and what you stand for, but not centering myself in it. I want to amplify the work of people who dedicate their time day in and day out. I’m going to share that voice and those words more than I’m going to share my own.”

Thirty years after Shoal Creek laid bare the sins of golf, the words of Rev. Abraham Woods, the former president of the Birmingham chapter of the Southern Christian Leadership Conference, still reverberate.

“The ripple effect has been felt throughout our nation,” he said. “This sounds the death knell of exclusionary clubs.”