For 54 years Rosa and Curtis Griffin have lived a life of love and respect.  The Griffin’s met at Johnson’s Restaurant, which was his wife’s family diner located in downtown Jacksonville. As the story goes, Griffin immediately informed her father that he knew meeting Rosa was love at first sight!

After discussing his plans for their future, Curtis and Rosa later married, raised three daughters, traveled, retired together and shared many memories.

Last week, Rosa and family decided to have a surprise 75th birthday party to celebrate the love of her life and recognize his achievements and contributions to his community and church. Born on October 23, 1943, Curtis was celebrated by fifty of his closest family members, Stanton High classmates and friends.

The party was held at Emmanuel Missionary Baptist Church where Griffin serves as a deacon.  He entered the church to big smiles, hugs and pleasantries. Griffin was stunned and smiled at the podium telling his guests, “As a young man growing up in the South I’ve witnessed segregation, desegregation, voting rights denied and tried, but I’ve survived with the love of my wife, family and friends and the almighty God.”

Guests enjoyed a buffet style dinner, music and testimonials.  As a faithful husband, father, grandfather and friend, Curtis has stayed active in his church and his side hustle as volunteer newspapers man. Close family and friends all commented on the impact that Griffin has on everyone he touches. 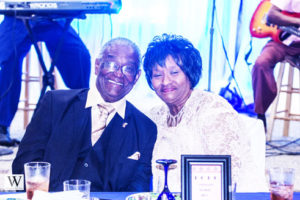