Although last Saturday’s football game between the Florida Gators and Georgia Bulldogs didn’t turn out the way the Gators expected, Black Alumni still celebrated with a world-class tailgate party.

The University of Florida Association of Black Alumni Jacksonville Chapter hosted its first complimentary Gator Nation tailgate and watch party during the annual game, in front of Veterans Memorial Arena. Alumni were decked out in their best Florida Gators’ attire as a sea of blue and orange dominated the area near the party.

Tailgate attendees brought their lawn chairs and played games with a chance to win a Gator Swag bag.  Local chapter president Marques Wilkes said, “This tailgate was a success.  We wanted to celebrate our alma mater during the Georgia-Florida game to meet and greet our classmates, friends and family for a great game rivalry.”

First played in 1915, the annual Florida–Georgia football rivalry is played every year in Jacksonville. Yearly, the game attracts huge crowds and over the years the festivities earned the nickname of the “World’s Largest Outdoor Cocktail Party.” 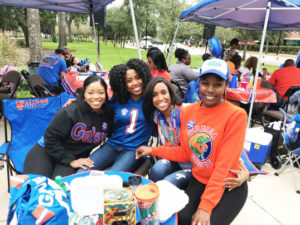