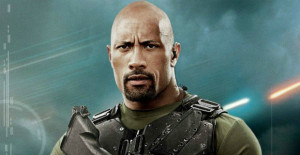 Nationwide — Actor Dwayne Johnson, who started out as “The Rock” in the world of professional wrestling, is now the world’s highest paid actor. According to Forbes Celebrity 100, he has raked in $64.5 million already this year, making him the king of Hollywood.

Johnson, who attributes his success to his “extreme work ethic”, won a total of 17 championships as a wrestler and thus is no stranger to success. He posted on Instagram, “Receiving news like this will always serve as my anchoring reminder to continue to work even harder. We not only want to ‘embrace the grind’, but take the grind to new levels.”

He added, “I learned a few invaluable lessons a long time ago that can help all of you guys out there succeed at whatever it is you’re doing. Greatness is never achieved alone. Surround yourself with hungry, brilliant individuals who not only buy into your philosophy, but who are all willing to work just as hard as you. Power of teamwork.”

And then he revealed his humble background: “And don’t ever forget where you came from. I was evicted at 14 years old and completely broke by 23. Every day I wake up as if that eviction notice is right around the corner waiting for me.. which is why I always say, “the wolf is always scratchin’ at the door”. He’s scratchin’ cause he’s hungry and never satisfied. We embrace and respect our past (even if it was f*cked up), but we never let it define our future. Let’s stay hungry and chase that greatness. I will now jump in my pick up truck, go to work and figure out whether or not I need psychiatric therapy for this damn wolf that’s become my best friend.”

Other celebrities who appeared on the Forbes Celebrity 100 list include Taylor Swift (who has made $170 million this year alone), Adele, Kevin Hart, Lebron James, Dr. Phil, Kim Kardashian West, Ellen DeGeneres, and more. Collectively, the world’s 100 highest-paid celebrities have made more than $5 billion over the past 12 months.