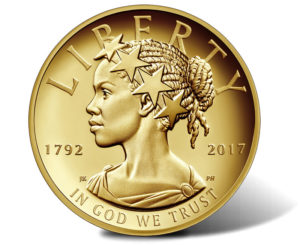 For the first time in American history, the United States Mint and Treasury have put a black woman on money.

Recently, the agencies unveiled the 2017 American Liberty High Relief Gold Coin, which portrays Lady Liberty as a woman of color.

“We are very proud of the fact that the United States Mint is rooted in the Constitution,” Principal Deputy Director Rhett Jeppson told ABC News.
“Our Founding Fathers realized the critical need for our fledgling nation to have a respected monetary system, and over the last 225 years, the mint has never failed in its mission.”

The coin shows a black woman with braided hair wearing a crown of stars, and is inscribed with “1792,” for the year the U.S. Mint was established, “2017” and “IN GOD WE TRUST.”

The coin is the first in a series of coins that will feature Lady Liberty as Asian American, Hispanic American and Native American, and which will be released every two years. They are collectors coins and will not be in circulation.

While it was announced last year that Harriet Tubman would replace Andrew Jackson on the $20 bill, those bills have not yet been created.