GABORONE, Botswana — Could the innate animal tracking skills of Botswana’s Kalahari Bushmen save them from poverty?

Researchers and conservationists think so.

The art—honed and passed from generation to generation—is slowly disappearing, replaced by modern counting methods such as aerial surveys. Bushmen, also called San, are indigenous people of Southern Africa.

Njoxlau Kashe, 58, an accredited master tracker, fears that the tracking skills among Kalahari Bushmen are being forgotten quickly due to the rapid evolution of their culture. 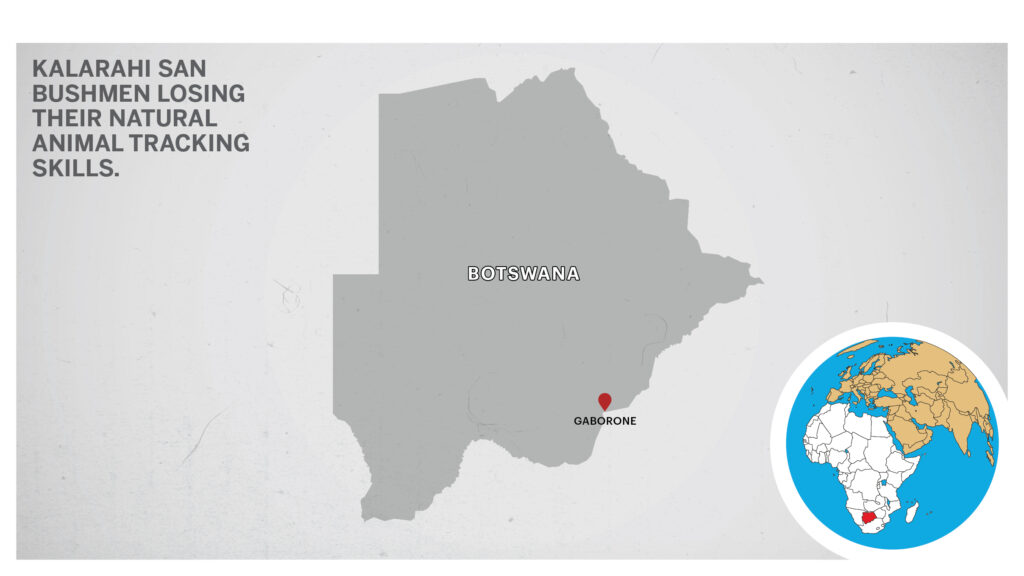 “Tracking skills among Kalahari Bushmen was important since most trackers eked a living from the craft,” he told Zenger News.

“In the past, it was an art we relied on to put the food on the table. We learned animal tracking skills as part of our daily lives. As hunters and gatherers, there were no limits to our traditional way of life.”

Kashe is one of the Kalahari Bushmen who have been accredited by CyberTracker Conservation, a non-profit organization based in South Africa that provides tracker certification.

As a master tracker, one of his roles is to train and evaluate individuals to attain a certificate in indigenous tracking.

“The lifestyle of our young men today is not similar to ours. I have been taking some of them for practical tests in tracking, but most of them are not doing well. They usually get around 50 percent, which is not good enough for someone to attain a certificate from CyberTracker,” Kashe said.

Kashe is hopeful that the youth can still learn the skill, although they are not very keen.

“With time, I think they will improve as we continuously go into the wild with them. However, we mostly rely on scientific researchers nowadays,” he said.

He believes tracking skills were essential for the environment since it gives them a clue about wildlife species.

“Even during human-wildlife conflict incidents, we can tell which carnivores were involved in killing domestic animals,” Kashe said.

He has never used the Global Positioning System (GPS), which modern researchers use, even though it is a technology he understands.

However, Jane Horgan, the engagement and awareness coordinator at the Cheetah Conservation Botswana, thinks it is too early to consign the tracking skills of the Kalahari Bushmen to history bins.

“No one can track animals as well as the Bushmen,” she told Zenger News.

“Having them on our research teams means that we can have the most accurate information possible. They can detect even the slightest mark in the sand and identify not just what species it is, but sometimes even the age and sex of the animal, and when it had left that track.”

The Kalahari Bushmen have been tracking animals through the Kalahari sands for time immemorial, according to Horgan.

She believes employing Kalahari Bushmen trackers for their tracking skills also has other significant cultural and socio-economic benefits.

Although tracking skills are widespread through the communities, few job opportunities currently exist to utilize these skills. Some Bushmen turned to bushmeat poaching to survive in light of poverty and hunger to survive.

“By providing more job opportunities for trackers, researchers can support them to have reliable incomes so that they do not resort to poaching to survive,” said Horgan.

With their cultures turning more into livestock farming and settlement living, their skills utilized for their previous nomadic lifestyles, such as tracking, are becoming obsolete.

“Though researchers use the skills, sometimes their tracking skills are becoming less and less common amongst the youth. By encouraging this incredible skill, we can facilitate passing this traditional and incredible knowledge from this generation to the next,” Horgan said.

She said the Kalahari Bushmen had been involved with scientific studies that have changed the way people understand the Kalahari ecosystem. She said their knowledge has helped them identify population estimates for the Central Kalahari Game Reserve and the Kgalagadi Transfrontier Park.

“In all the track survey counting conducted annually with the help of Kalahari Research and Conservation, the Kalahari Bushmen expertise has played an integral part in wildlife population counting,” she said.

“Results from subsequent surveys have uncovered the rich diversity within the Wildlife Management Areas and protected areas highlighting the great need to conserve these areas to facilitate wildlife movements. This data hopes to encourage the government to maintain these areas and minimize grazing area allocations so that these vital wildlife movement corridors can be conserved,” she said.

Horgan believes utilizing trackers to conduct track surveys is cheaper and more accurate to get population estimates for large carnivores like cheetahs.

Typically, track surveys are conducted with a researcher and two trackers sitting on the front of a vehicle above the bull bar.

“Roads or transects are driven at slow speeds, ideally below 15 kilometers (9.3 miles) per hour. The trackers scan the road. They signal to the driver to stop when they see something,” she said.

“They get off to investigate and confirm what species it is. Most importantly, the Bushmen need to identify how old the track is, as most study techniques require tracks to be less than 24 hours old. A GPS coordinate of the location is taken, and all the information is entered into a datasheet. They then continue on the track,” she told Zenger News.

“With our culture and traditional lifestyle, we can make a living,” Gakelebone told Zenger News. “The problem is when you impose another lifestyle not known to us.”

His Ph.D. research was titled “Tracking a better way to count wildlife: Testing the Formozov-Malyshev-Pereleshin formula in the Kalahari” toward his Doctor of Philosophy in Conservation Biology in the Department of Renewable Resources at the University of Alberta, Canada.

“They are the stars of the show, and to me, they are the real learned,” Keeping told Zenger News about the trackers. “They helped me along to earning a doctoral degree.”

He said that tracking skills could create numerous meaningful and well-paying jobs in one of the country’s most poverty-stricken regions.

“Incentive from jobs will keep exceptional track interpretation skills and our shared intangible cultural heritage alive. Two of these three outcomes are top goals on Botswana’s national agenda, and all would enhance conservation in the long term. I can hardly think of another single intervention that would check so many priority boxes and do so much good,” he told Zenger News.

Keeping said the Bushmen tracking skills could be combined with an authentic and unique ecological and cultural tourism experience that maintains traditional skill sets and long-term wildlife monitoring and conservation.

“Retrospectively, the decline in traditional tracking skills is attributable to the failure of governments to recognize subsistence livelihoods as a valid human endeavor,” he said.

He said evidence suggests that uplifting trackers through involvement in conservation could reverse the trend. Bushmen tracking skills must be developed into a modern profession, according to Keeping.

“It is remarkable that destitute trackers from forgotten quarters of the globe possess advanced observation skills that greatly surpass trained wildlife professionals. Is tracking replacement with aircraft, laser rangefinders, and camera traps justified? Maybe not on lands where local people have tremendous value to add, are invested in long-term conservation, and are without jobs to replace their subsistence livelihoods.”

The post Footprints In The Sands: The Dying Craft Of Animal Tracking Among Kalahari Bushmen  appeared first on Zenger News.