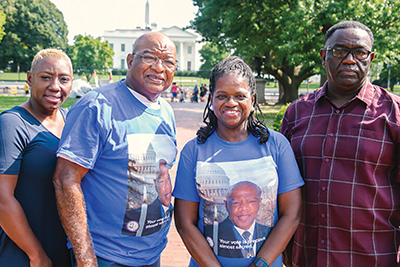 And, as the world knows, the Congressman gave every ounce of his time, energy, blood, sweat and tears, in fighting for the right to vote for all people.

This month, family members of the renowned freedom fighter visited the nation’s capital, hoping to meet with lawmakers to push two crucial pieces of legislation to blunt voter suppression efforts in many Republican-led states.

“When you see something unfair and unjust, you have a moral obligation to do something,” Lewis’ niece, Angela Lewis Warren, told NNPA Newswire.

Lewis Warren joined her uncles, Henry Grant Lewis, and Samuel Lewis, on the trip to Washington.

The family said they wanted to continue the Congressman’s legacy by pushing the “For The People Act” and the “John Lewis Voting Rights Advancement Act.”

Both pieces of legislation have lingered in an evenly divided Senate, where Democrats like West Virginia’s Joe Manchin have stubbornly refused to consider abolishing or bending filibuster rules to push the bills through.

“By any means necessary, they have got to get those bills passed,” Samuel Lewis, the 8th of 10 children in the Lewis family.

Samuel Lewis, who served for 28 years in the U.S. military, forcefully opined that Democratic leadership should abolish the filibuster if needed to pass critical legislation.

“I think they should,” he stated.

“Our dream is to keep the Congressman’s dream and to move his legacy forward,” Grant Lewis, a retired auto industry worker and the 9th of the 10 Lewis siblings asserted.

“That means getting up in the morning, putting on our boots, and catching a plane to Washington. Whatever the case may be.”

Attorney Barbara Arnwine, the president and founder of the Transformative Justice Coalition, joined the family in Washington.

Arnwine, who also serves as co-chair and facilitator of the National Commission for Voter Justice and other voting rights organizations, noted the racist history of the filibuster, and agreed that Democrats must act to either abolish it or amend the rules to pass key bills.

“The filibuster is a white supremacist notion,” Arnwine declared, adding that it was created to suppress people of color.

With GOP-controlled states like Georgia, Florida, and Texas, making it difficult for people of color and other underserved communities to vote, the family believes Congressman Lewis would urge his party to protect what he believed a precious right.

According to the nonprofit Brennan Center, the For The People Act includes automatic voter registration and other steps to modernize U.S. elections.

It includes a federal guarantee of free and fair elections without voter suppression, coupled with a commitment to restore the full protections of the Voting Rights Act; small donor public financing to empower ordinary Americans instead of big donors (at no cost to taxpayers) and other critical campaign finance reforms; an end to partisan gerrymandering; and a much-needed overhaul of federal ethics rules.

“These reforms respond directly to Americans’ desire for real solutions that ensure that each of us can have a voice in the decisions that govern our lives, as evidenced by their passage in many states, often by lopsided bipartisan margins,” officials continued.

“They are especially critical for communities of color. Racial justice cannot be fully achieved without a system in which all Americans have the means to advocate for themselves and exercise political power.”

“We are going to keep fighting,” Henry Grant Lewis insisted.

“One message that my brother would say is keeping the faith. Even though these current voter suppression laws have been put in place to deter us from going to the polls, we have to see what’s most important and go to the polls.

“And we have to do that with even greater numbers the next election because of these laws. So, we have to have a big turnout.”

Both brothers and their niece spoke somberly of what they miss most about Congressman Lewis.

For Angela Lewis Warren, it was her uncle’s desire and ability to never leave anyone out of a conversation or a greeting.

“We knew that we mattered.”

Henry Grant Lewis said he misses the intimate conversations with his brother.

“We used to have early morning conversations when I was on my way to work, and he was on his way to work,” Grant Lewis noted.

“Then, we’d have late-night conversations, and they were very real and very special. We had this special bond that tied us together, and he was such a family person who loved being with his siblings and talking with his great-nieces and nephews.”

For Samuel Lewis, it’s simply his brother’s presence that he has a longing.

“I was nine years younger, but we also had a bond,” Samuel Lewis recalled.

“We loved to go to ballgames together and like my niece stated. “He gave everyone his attention. I recall being at Atlanta Braves baseball games, and I would go to my seat, and sometimes it would be an hour before he would finally come back to his seat because everyone wanted to talk to him. He was really patient with everyone, and it wasn’t fake. He was really genuine.”