Attendees from around the country joined thousands in New Orleans, LA last weekend for the annual Essence Festival. #EssenceFest took over social media due to through-provoking events with Reverend Al Sharpeton, Tryavon Martin’s mother Sybrina Fulton, Angela Rye and Maxine Waters. Plus there were performances from the likes of Brandy, Mary J. Blige and Janet Jackson.

Jacksonville resident Tiffany Duhart and her family have attended Essence for ten years. Each year the Duhart family treks to the festival for the variety of activities for the entire family.

This years’s festival also broke some serious records.  In its 24th year, Essence Fest attracted 510,000 attendees, the second largest number in the festival’s history. For the first time in the festivals history, all three nights of Superdome concerts were completely sold out with reports showing that the 2018 festival generated $1 billion in revenue for the New Orleans economy.  Now that’s a show of real Black power! Shown at the family vendor hall are Jacksonville, Florida residents Geri Duhart, Tiffany Duhart and Jason Duhart 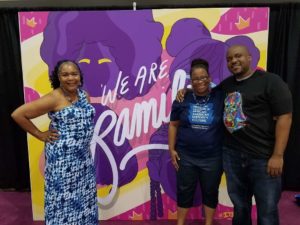