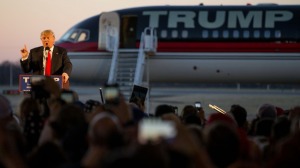 Trump got his weekend off to a golden start when he re-tweeted a quote widely attributed to Benito Mussolini, the founder of fascism. Now he’s refusing to cast aside campaign support from none other than David Duke, a former Grand Wizard of the Ku Klux Klan.

“I don’t know anything about what you’re even talking about with white supremacy or white supremacists,” an apparently confused Trump told Jake Tapper on CNN’s State of the Union.

Tapper tried three times to get comment from Trump on Duke’s recent support of his presidential bid, and was stonewalled each time. The would-be Republican nominee wants to “look at the group” before passing judgment.

“You wouldn’t want me to condemn a group that I know nothing about,” Trump said. “If you would send me a list of the groups, I will do research on them and certainly I would disavow if I thought there was something wrong.”

Tapper fired back, expressing disbelief that Trump would be unfamiliar with such a public figure or the hate group he once represented. “I’m just talking about David Duke and the Ku Klux Klan here, but—”

Trump interjected before he could finish: “Honestly, I don’t know David Duke. I don’t believe I’ve ever met him. I’m pretty sure I didn’t meet him. And I just don’t know anything about him.”

Tapper’s line of questioning came in response to Duke’s comments on Feb. 25 that a vote against Trump is “treason to your heritage.”

“I’m not saying I endorse everything about Trump,” Duke said on Thursday. “In fact, I haven’t formally endorsed him. But I do support his candidacy, and I support voting for him as a strategic action. I hope he does everything we hope he will do.”

Trump’s refusal to distance himself from Duke during his chat with Tapper is odd, given that he did so already during a Friday news conference in Texas (via Buzzfeed).

“I didn’t even know he endorsed me,” Trump said at the time. “David Duke endorsed me? I disavow, okay?”

Republican presidential hopeful Marco Rubio had some choice words to share on Trump’s CNN appearance, and his unwillingness to distance himself from Duke.

“Not only is that wrong, it makes him unelectable,” Rubio said Sunday at a capacity crowd in Purcellville, Virginia. “How are we going to grow our party when we have a nominee who wont repudiate the Ku Klux Klan?”

Rubio added that Trump was lying when he said he didn’t know who Duke is.

With additional reporting by Emily Cahn.