TJM Communications  – Seattle Seahawks quarterback Russell Wilson was announced as one of ‘Earth’s Mightiest Athletes,’ a new collective of sports superstars that embody the positive characteristics of Earth’s Mightiest Heroes—The Avengers, with their achievements on the playing field and their super-powered community service.

Wilson is recognized for exhibiting the qualities of Captain America, including agility, strength and courage for those most in need. Wilson has been instrumental in the community, founding the ‘Why Not You Foundation’, a nonprofit dedicated to fighting poverty through education and empowering youth to lead with a why not you attitude. 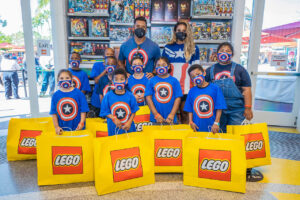 On Father’s Day as a way of celebrating his new title, Wilson and a group of Los Angeles-based kids he’s worked to support through his Why Not You Foundation, embarked on a magical day of play at Disneyland Resort in Anaheim California, which included the following festivities:

Wilson and the full consortium of ‘Earth’s Mightiest Athletes,’ will be honored at the Sports Humanitarian Awards on July 12 in New York, with a television special airing on July 24 at 2 p.m. ET on ABC.

“Captain America possesses the same never-give-up spirit that I aspire to achieve every day, especially when it comes to helping kids,” said Russell Wilson. “It’s very cool to be viewed on the same level as such an iconic hero, and very special to get to celebrate Father’s Day with some of the world’s most inspiring young people at The Happiest Place On Earth.” 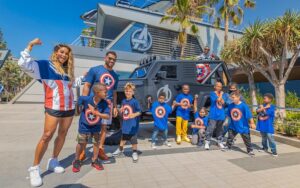