(Source: www.tjmcommunications.com) – Last year, Disney Parks announced that Imagineers are developing an all-new attraction coming to both Walt Disney World Resort and Disneyland Resort inspired by the fan favorite Walt Disney Animation Studios film, “The Princess and the Frog.” With the kick off of World Princess Week today, celebrating the characteristics these Disney heroes inspire in fans all around the world, there are some new details to share! 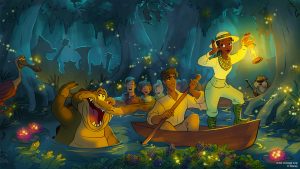 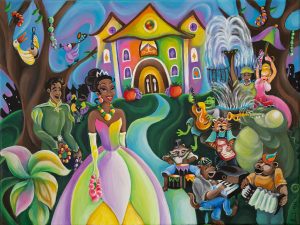 Disney recently gathered Kenneth Moton, National Correspondent for ABC News as he joins Stella Chase Reese, Owner of Dooky Chase’s Restaurant and daughter of Leah Chase; Carmen Smith, Creative Executive, Vice President, Inclusive Strategies for Walt Disney Imagineering; Charita Carter, Senior Producer for Walt Disney Imagineering; and Marlon West, VFX Supervisor for Walt Disney Animation Studios at Dooky Chase’s Restaurant in New Orleans — founder Leah Chase was one of the inspirations for Princess Tiana — to talk about Tiana’s impact over the past decade and the creative process behind the upcoming attraction, including the next-level technology Imagineers are employing to bring it to life.

A new rendering of the attraction, gives a first look at the attraction’s story. The story will take place after the final kiss as Naveen and Louis join Tiana on her latest adventure – hosting a one-of-a-kind Mardi Gras celebration where everyone is welcome – during which some original music inspired by songs from the film will bring guests into the story.

Tying to Leah Chase’s love of art, one of the early sources of inspiration has come from Sharika Mahdi — a visual artist, art educator, and alumna of the renowned YAYA (Young Aspirations Young Artists) Arts Center located in New Orleans — who was commissioned to create a series of four original paintings to inspire Imagineers.

In creating this story, Walt Disney Imagineers did in-depth research into the culture of New Orleans to tell a story that’s as authentic to that region as it is to the characters’ stories. And to celebrate all of these developments, love and appreciation for New Orleans, and a commitment to arts education, Disney announced a $50,000 donation to the New Orleans Center for Creative Arts (NOCCA).

Roundtable at Dooky Chases on August 15, 2021. Photo by Paul Morse