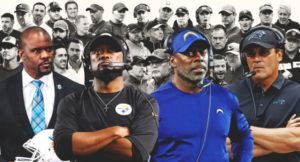 The odds of becoming a head coach in the NFL are small if you’re a Black man. As noted by 12up.com, “black coaches aren’t afforded the same chance to reach the pinnacle of their profession as whites, and are continually passed over in favor of…well, hunches,” the outlet writes .As we previously reported, several sports analysts have slammed the recent surprise move by the New York Giants hiring 38-year-old New England Patriots wide receivers coach Joe Judge as the team’s new head coach.

Critics are slamming the NFL for ignoring the Rooney Rule, which requires teams to interview minority candidates during every head-coaching search.

There are just three African-American head coaches in the NFL, the same number as when the Rooney Rule was instituted in 2003.

“What has the Rooney rule did but give somebody who is not qualified a seven-year $60 million dollar deal that has not done anything at this level?” James Harrison said on Fox Sports, referring to Matt Rhule’s hiring by the Carolina Panthers. “If Dan Rooney was alive today he’d be pissed to see what it has done. So now it has come down to ‘Let’s check a box, we got a minority to get an interview. We checked the box and let’s move on.’”

The NFL is composed of mostly Black athletes, but there’s never been a Black team owner or president, and there’s only been one Black general manager. And for many sports fans, athletes, reporters and analysts, that is a major problem.

Mike Tomlin of the Pittsburgh Steelers, Anthony Lynn of the Los Angeles Chargers and Brian Flores of the Miami Dolphins (pictured) are the three black coaches in the league, while white head coaches lead 28 other teams in the NFL. Washington Redskins head coach Ron Rivera, who was hired last week and is Latino, is the league’s fourth minority head coach and the only one to be hired this cycle.

“It was about countless Black folks being passed over, and the latest was for a positional coach – which would’ve NEVER happened if that coach was black. That was the point. I’m quite sure there are legitimate head-coaching candidates who are positional coaches. The real issue is the issue of fairness NOT being accorded to black coaches,” Smith wrote in two separate tweets.