By Stacy M. Brown – Vice President Mike Pence affirmed Joe Biden as president-elect early Thursday morning in the wake of a chaotic assault on the U.S. Capitol, finally putting an end to President Donald Trump’s quest to overturn the results of the November election. 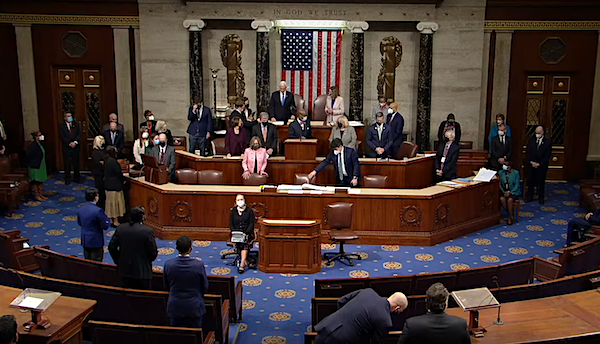 A joint session of Congress finished the formal count of the Electoral College votes hours after a mob of angry Trump supporters left a rally for the president and interrupted the proceedings, wreaking havoc upon the Capitol in one of the most stunning acts of domestic terrorism in U.S. history.

The final tally was Biden receiving 306 electoral votes to Trump’s 232.

The usually mundane and procedural count of Electoral College votes faced an almost treason-like challenge by more than 100 Republican representatives and roughly a dozen GOP senators, most notably Sens. Ted Cruz of Texas and Josh Hawley of Missouri.

The GOP-led objections focused on states like Georgia and Wisconsin, specifically in predominately Black areas like Atlanta and Milwaukee.

Several Republican senators who planned to object reversed course after the riot, however, including Kelly Loeffler, who lost her seat the previous day in Georgia’s runoff elections.

Nevertheless, Cruz, Hawley and a handful of other senators still objected to Arizona’s election results, furthering delaying the inevitability of Biden’s victory.

After hours of debate, the Senate rejected the objection by a 93-6 vote.

A challenge to Pennsylvania’s results was also overwhelmingly rejected by the Senate, 92-7. The full Congress then swiftly finished the count from the rest of the states, and the win by Biden and Vice President-elect Kamala Harris was affirmed shortly before 4 a.m., more than 14 hours after the count began.

The procedure was seen by Trump as his final chance to nullify his November defeat, and in recent days he pressured Pence, who as vice president oversaw the count, to make it happen. But Pence wrote in a letter to Congress before the session began Wednesday that such actions were beyond his power.

“It is my considered judgment that my oath to support and defend the Constitution constrains me from claiming unilateral authority to determine which electoral votes should be counted and which should not,” Pence wrote.

During the rally taking place as Congress began the count, Trump stoked the crowd, which some estimated at more than 25,000, by again putting the onus on his vice president to give him a victory.

“If Mike Pence does the right thing, we win the election,” Trump assailed at the rally. “Mike Pence is going to have to come through for us. And if he doesn’t, it’s a sad day for our country.”

As demonstrators left the rally and converged on the Capitol, Trump issued a series of tweets that appeared to inflame his supporters. Twitter, Facebook and YouTube each flagged and then removed the tweets. Twitter locked Trump’s account and is contemplating permanently removing him from its platform.

“Mike Pence didn’t have the courage to do what should have been done to protect our country and our Constitution, giving states a chance to certify a corrected set of facts, not the fraudulent or inaccurate ones which they were asked to previously certify,” Trump tweeted. “USA demands the truth.”

Once the massive crowd reached the Capitol steps, many of them powered past police and made their way inside, smashing doors and windows while attempting to enter barricaded areas.

The riots resulted in four deaths, including one woman who was fatally shot by a Capitol Police officer, and forced lawmakers to evacuate the building before order was restored.

World leaders from Canada, Great Britain, Sweden and other places publicly called on Trump to concede the election and end his supporters’ actions.

By Thursday morning, Trump appeared to calm down and finally agreed to a peaceful transition of power.

“Even though I totally disagree with the outcome of the election, and the facts bear me out, nevertheless there will be an orderly transition on January 20,” Trump said in a statement. “I have always said we would continue our fight to ensure that only legal votes were counted. While this represents the end of the greatest first term in presidential history, it’s only the beginning of our fight to make America great again.”

Ironically, the first recorded instance of such widespread objections within Congress was in 1861, after Abraham Lincoln claimed the presidency, winning just 40 percent of the popular vote.

According to researchers at The Stanford Advocate newspaper, more senators followed their states out the door in December and January as states seceded.

“Some simply didn’t show up for the next session; others made formal resignations,” the newspaper reported. “Crowds lined up in the frigid dawn to hear Sen. Jefferson Davis’s farewell address, during which he made clear he thought secession was justified because he believed Lincoln would end slavery.”

When the Senate reconvened, the remaining members had had enough. Sen. Daniel Clark of New Hampshire proposed a resolution to expel 10 senators on the grounds several grounds.

“They engaged in [a] conspiracy for the destruction of the Union and government, or, with full knowledge of such conspiracy, have failed to advise the government of its progress or aid in its suppression,” Clark said, the Advocate reported.

The Constitution required a two-thirds majority to expel a member of the Senate. Before that moment, only one senator had been expelled, and more than six decades had passed since that time.

The motion passed 32 to 10; those expelled were two senators from Arkansas, North Carolina, Texas and Virginia, plus Chesnut of South Carolina and Alfred O.P. Nicholson of Tennessee.

Within seven months, four more were expelled for offering aid to the enemy, including John C. Breckinridge of Kentucky, whom Lincoln had beaten in the 1860 election.

“Almost all of the expelled men joined the Confederacy in leadership positions. Four died during or shortly after the war; when the Confederacy surrendered, four escaped to other countries, and two were briefly imprisoned,” The Advocate reported. “Within a few years, all had resumed distinguished careers, though none ever returned to the Senate.”

For more on the original article: https://www.washingtoninformer.com/congress-certifies-bidens-win-in-aftermath-of-deadly-protests/