By Stacy M. Brown, NNPA Newswire Senior National Correspondent – (Original News Source: www.blackpressusa.com) – Freshly released from prison after having his conviction overturned by the Pennsylvania Supreme Court, Bill Cosby has opened up like never before. 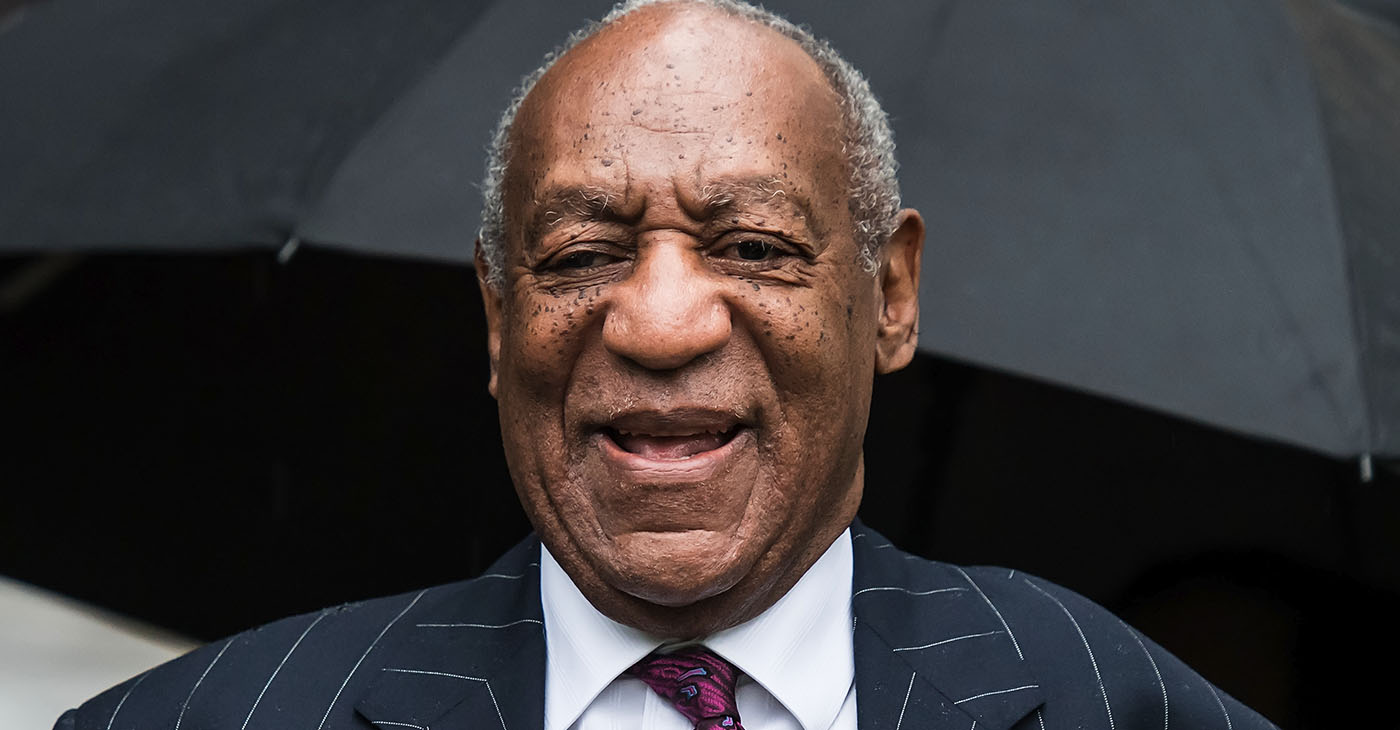 In conversations with the Black Press of America, and his only extensive comments since his June 30 release after nearly three years, Cosby took his detractors — and others — to task.

“When will we ever see the practical in all of this?” he asked.

He described the reaction naysayers have to his famous “Pound Cake” speech and the Supreme Court’s ruling overturning his conviction.

“You’re sitting in a room trying to explain something, and there is a knock on the door. You say, ‘who is it?’ [The response is], ‘It is the truth.’ So, people start jumping out of the window.”

“The court’s decision was not a technicality,” said Cosby. “These people sound like they haven’t read what the judges have written. It’s not a technicality. These [detractors] don’t want to know anything. It’s like the woman who said she knows five women that I drugged and raped. Well, where are they?”

“They didn’t want to understand the ‘poundcake’ speech.  I want a piece of pound cake, so I want to please my mother. Today, you don’t raise your children to have a responsibility when they grow up.

“There’s no responsibility, and that’s why there is such an upheaval about a simple story that told people that you need to have a conscience. You want to steal, and you want to break into something. What will my mother think? We raised [his late son] Ennis with the same principles and our daughters, and we’ve taught our grandchildren the same way.”

In his now-infamous civil deposition whose unsealing led to the overturned criminal trial verdict, Cosby was criticized and often misquoted as saying he drugged women to rape them. Cosby was never charged or convicted of rape.

He responded “yes” in the deposition to a question of whether he had ever provided a Quaalude to a woman that he was interested in having sex with.

That, he said, is a far cry from surreptitiously slipping someone a drug and, without their consent, engaging in sex.

Cosby said those with such strong opinions should educate themselves, read the deposition and court transcripts for themselves without having mainstream media dictate falsehoods to them.

He suggested that the seven-page ruling by the Supreme Court should be required reading, particularly for those reporting on the case.

“I know what happened, and I’m watching and hearing these fascists and Nazis, and I watched them really come out of the woodworks as termites. The infestation of when [former President] Donald Trump came through, and they just let it all hang out. That’s who they are. That’s who their ancestors are. They want their ancestors to be people who came here for religious freedoms after being persecuted – but by whom? Things weren’t right in dear old England. They got on these ships, but you were criminals, and people signed on to look after wealthy people’s findings. Christopher Columbus got as lost as a White man can get, but got off the boat, took a flag, and said he would name this and so forth and so on.”

Cosby also lashed out at comedians he paved the way for who went along with false reports about him or otherwise remained silent.

He laughed at the idea that Netflix gave a combined $200 million to Eddie Murphy, Dave Chappelle, Chris Rock, and Arsenio Hall, who were championed on Saturday Night Live as “The Four bosses of Comedy.”

“Where was Kevin Hart? Where was Sinbad?” Cosby remarked.

Cosby and his wife of nearly 60 years, Camille, have donated an estimated more than $200 million to various colleges and universities.

That includes Howard University in Washington, where Cosby Show star Phylicia Rashad serves as a dean in the College of Fine Arts.

Dozens of colleges and universities gave Cosby honorary degrees based on the unprecedented support from Cosby and his wife, but many rescinded those honors before Cosby’s 2017 and 2018 trials.

Quickly, however, social media and some at the historically Black university scolded Rashad, forcing her to issue a second statement that included her empathy toward sexual assault victims.

Cosby took issue with the treatment of Rashad.

“They didn’t like what she was doing before,” Cosby noted, regarding Rashad’s early public support of him.

“They have to listen to donors. The donors command your directions. Surely, somebody, some writers — male and female — at BlackPressUSA, can respond to this because it has got to wake people up.”

The jury in that trial reportedly took an initial 12-0 not guilty vote but was instructed by Judge Steven O’Neill to continue deliberating.

Cosby told the Black Press that he remains skeptical about whether he received maximum effort from his lead attorney.

“I remember Tom telling me on his cellphone that a woman working in his building came down and told him that I was guilty,” Cosby recalled. “He never said, ‘we will see about that.’”

Cosby offered that he disagreed with Mesereau’s decision to select a jury from Montgomery County and called the jurors “imposters of his peers.”

“One guy when they picked him, the judge asked him something, and he made a statement about another Black comedian, Dave Chappelle,” Cosby remembered.

During jury selection, another juror famously said, “we can all go home; he’s guilty.”

District Attorney Kevin Steele successfully argued to keep the juror on the panel despite another potential juror complaining that she heard the statement.

Cosby said that move proved the setup was real.

“The report came from a Black woman. Then there was a private meeting with the judge, the Black woman, and her lawyer,” Cosby stated.

“And when they came out, she was smiling. We can only assume that the judge and Mr. Steele said something along the lines of, ‘your cousin Mike who is doing time … these parking tickets will cost this much… How do you walk out smiling after reporting something like that unless they are tampering with your family?”

For many commentators, the elephant in the room remains the 60-women who have made claims that Cosby assaulted them.

Cosby attributed that high number to Gloria Allred, who demanded and advertised that $100 million be put in an account for any alleged victims.

He opined that her scheme ultimately backfired.

“The seven pages by the Supreme Court justices makes too much sense,” Cosby declared. “How about if these 60 women are lying and they’ve been taken care of?

“It has been proven that Gloria Allred darkened the skin of some of them, braided their hairs to try and show this wasn’t racist with all white women. People know this. What about the woman who lied about Emmet Till?

“How about all the stories that haven’t been out there where men have spent time in jail, and finally, their accuser admits they are lying?

“There was a young man who went all the way into court, and what happened? Turns out, the woman in the courtroom who accused the young man said she was only angry because he didn’t call her back.”

“But I had taken a Quaalude before when I had lived in Colorado, so that’s why I think in my memory I remember him saying it was a Quaalude because I kind of knew what it was,” Baker-Kinney said on direct examination by prosecutors.

“I had no indication ever in my life to think that he would want me to take two for any other reason than to have fun, kind of a little mood-enhancing party thing. So, I figured, if Bill Cosby, at the time, thinking I don’t know if that was when he was doing pudding commercials or whatever and he seemed like a – his appearance was that of a happy, nice comedian kind of thing, that I never would expect anyone to say, ‘here, take two.’ Even though I didn’t know him, I trusted him. And I know that maybe taking two was not a good idea.”

Cosby said that testimony alone showed he was dealing with “bad actors.”

“One woman says it was a hot day, and she was sweating. Go back and look, it was cold and 40 degrees,” he exclaimed.

“Now, Allred gives you her sloppiness. If Allred were not so sloppy, you could say I’m in trouble with these lies.”

Cosby pointed out that Dickinson testified that “in 1982, Dr. Huxtable is on top of me. America’s Dad.”

“It’s ridiculous,” Cosby said, pointing out that ‘The Cosby Show’ didn’t debut until 1984, so there was no “Dr. Huxtable.”

And Cosby did not receive the “America’s Dad” moniker until 1986.

Further, in a book some 20 years after the alleged assault, Dickinson wrote that Cosby was a “gentleman” and painted him as a great guy. Her autobiography never hints at any problems with Cosby.

That many choose to believe the groundbreaking entertainer is guilty is a result of a destructive media who “has always been at war with justice,” Cosby declared.

“I know whether or not I drugged so and so and went inside her rectum. There were so many things unvetted. They fly up in the air and fly away. I was there, and I know what happened.

“All these women who hate, with all the tentacles of jealousy, and the jealous men … to say that you are drinking beer and a man offers you a Quaalude. You take it and get into trouble, and now later you claim he had a white box or something, and you say, ‘I think he put his penis in my mouth.’ You are not making any sense.”

Throughout the trial, Cosby said he sat as if he were directing a bad show.

He said the comedian and entertainer in him found a lot of the testimony amusing at best, scripted at worst.

“It was the worst acting ever,” he said. “None of them would have made it in a role anywhere, even playing themselves.”

When asked how he could get through the trials without showing much emotion, Cosby said he thought about many others who were falsely accused.

“The people who have come before me are all I kept seeing regardless of race, color, or creed,” he offered.

“Those who were looking for justice before me. Those looking at the laughing white boys who did whatever they did and the jury sitting there winking and smiling.

“I’ve seen this before in a kind of sick, sad way. It is my honor to sit here and watch this become personal. It is personal, and as a humorist, I’ve heard so many times people say, ‘that was you, but now they’re doing this to me.’”

Finally, Cosby exclaimed the joy of reuniting with his wife in New York after nearly three years in prison.

“They can say all they want and do all they want,” Cosby stated. “I have a wife who is a fighter. It doesn’t make any difference to her, and she is coming at you straight ahead.”