By Christina Maxouris – (CNN)With health officials still unsure how long the coronavirus pandemic will persist in the US, students across the country have received little insight on when they’ll be back in class.

If schools haven’t reopened by the fall, students will be able to take the SAT from home, the not-for-profit that administers the test said Wednesday.
The news follows an earlier announcement by the organization that said Advanced Placement (AP) exams would also be taken digitally by students this spring.
“As with at-home AP Exams, the College Board would ensure that at-home SAT testing is simple; secure and fair; accessible to all; and valid for use in college admissions,” the organization said in a statement.

At least 3 million students will be taking their AP exams online, the College Board said.
The College Board said that while this would be the first time SATs would be taken by students from home, it would not be the first time the test is administered digitally, adding it had already been done in several states and districts over the past year.
“Like the paper test, a digital, remote version of the SAT would measure what students are learning in school and what they need to know to be successful in college,” it said. 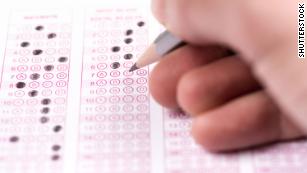 Colleges consider the unthinkable: Dropping SAT and ACT requirements for next year’s applicants
The digital, at-home test is one of three contingencies the College Board said it is planning to make tests available to students during the coronavirus pandemic.
If schools are open in the fall, the organization said it will offer in-school make up exams for tests that were canceled this spring. If it is safe to do so, the nonprofit also said it would begin offering the SAT again every month starting in August and through the end of 2020.
The announcements come amidst a rapidly changing landscape in the college admissions process. Already, at least 51 colleges and universities have dropped the ACT/SAT requirements at least through the fall of 2021, the National Center for Fair and Open Testing reported.
Others have announced they’re making those tests optional for an even longer period. Tufts University said it was going test-optional for three years. Tulane University, the University of Washington, Northeastern University and others have said they’re making testing optional for fall 2021 or longer.
In its Wednesday announcement, the College Board said it “fully supports admissions officers at member colleges who have said the circumstances of the public health crisis will be taken into account when considering tests scores, grades, and extracurricular activities in the coming year.”
College Board CEO David Coleman said that while all students would normally have the ability to take the SAT, the pandemic has had different effects on different households.
“The families hit hardest are most often those with the fewest resources,” the College Board said, citing Coleman.
“Our commitment to students is to give them as many opportunities as we can to show their strengths to admissions officers, while relying on the guidance of public health officials,” Coleman said in a statement.