With NFL owners slated to meet in New York in a matter of days for the fall meetings, free-agent quarterback Colin Kaepernick has filed a grievance against the league stemming from his lack of employment, a source familiar with the situation has told Yahoo Sports.

NFL general counsel Jeff Pash was made aware of the grievance by Kaepernick’s representatives on Friday, a second league source told Yahoo Sports. The grievance is expected to allege that NFL teams – specifically, owners – have worked in unison to keep Kaepernick out of the league, violating the collective-bargaining agreement between the NFL and players union. The grievance has been filed under the terms of the CBA that were signed by the league and NFL Players Association in 2011.

Despite leading the San Francisco 49ers to the Super Bowl following the 2012 season, Kaepernick has remained unsigned since opting out of his contract in March. The 49ers were planning to release Kaepernick during the offseason had he not opted out of his deal.

Kaepernick’s grievance was first reported by Bleacher Report on Sunday, as well as the quarterback’s hiring of high-profile attorney Mark Geragos. 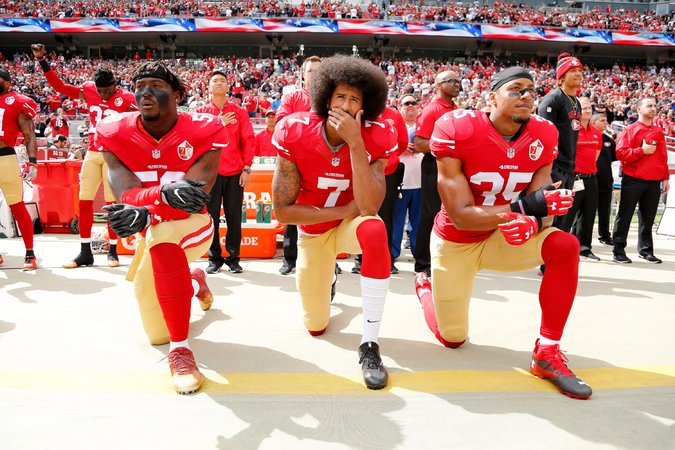 The grievance comes on the heels of months of debate over whether Kaepernick was being collectively blackballed by the NFL following the “anthem protest” movement he began in 2016 with the 49ers. Meant to draw attention to social justice reform and racial inequality, various forms of protests have swept through the NFL, college and even high school ranks this season.

The ensuing furor over NFL player protests has mushroomed into a significant political platform for President Donald Trump and sparked a debate over whether such freedom of speech can lead to discipline by team owners. Trump recently told Fox News that Kaepernick should have been suspended for kneeling during the national anthem.

Trump’s outspoken and repeated rebukes against NFL player protests raised Kaepernick’s profile – and the controversy over anthem protests – to unprecedented levels. In turn, league owners have grappled with how to taper the political whirlwind that has enveloped the NFL this season, making anthem protests a top priority in Tuesday and Wednesday’s fall meetings.

Now Kaepernick’s grievance will be a significant topic of interest, too, putting owners on the spot against allegations that amount to blackballing. And while the NFLPA isn’t expected to take an active role in Kaepernick’s grievance, the union will be keeping a close eye on his fight with the league.