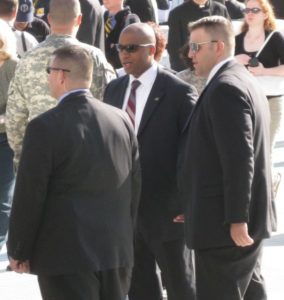 The Secret Service recently moved  to settle a nearly 20-year-old lawsuit in which African-American agents accused the agency of fostering a culture of racism and promoting less-qualified white agents over more qualified Black ones, according to court documents.

The agency successfully avoided a federal trial by settling the long-running case with a $24 million payment. As a part of the agreement, The Washington Post reported that the Secret Service wouldn’t admit to any wrongdoing or institutional discrimination. However, lump-sum payments of up to $300,000 to each of the original eight plaintiffs will be issued as a way to make up for the years of alleged discrimination and missed job opportunities.

Jennifer Klar, lead attorney for the Black agents, said both she and her clients were excited to have reached a settlement and hoped that the case would help prevent race discrimination in the future.

“At long last … Black Secret Service agents will not be constrained by the glass ceiling that held back so many for so long,” Klar said.

The nearly two decades-old complaint was initially filed in 2000 during the presidency of Bill Clinton and accused the security agency of passing over qualified African-American agents in favor of less-qualified white agents for promotions. Black agents also described patterns of discrimination that included their bosses and foreign leaders — who they were ordered to protect — using the N-word, racially charged jokes and banter, and the threat of retaliation against anyone who spoke out against the racist banter.

In the suit, lead plaintiff Reginald “Ray” Moore, who was a member of President Clinton’s detail, said he’d applied for promotion at least 200 times but to no avail. Instead, several of the white agents Moore trained enjoyed upward mobility in the agency.

“More than 16 years ago, a group of my Black colleagues and I decided to stand up for what was right,” Moore said in a written statement. “We had seen and experienced firsthand the racial discrimination and a good-old-boy network that passed us over for promotions to the highest levels of the Secret Service.”

The discrimination suit soon expanded from just eight plaintiffs to “more than 100 Black agents” as the Secret Service refused to cooperate with the case. That’s when the complaint was officially classified as class action, according to NPR.

Homeland Security Secretary Jeh Johnson expressed relief at the settlement, saying he was glad they could finally put this “embarrassing” chapter of Secret Service history behind them.

“Had the matter gone to trial, it would have required that we re-live things long past, just at a time when the Secret Service is on the mend,” Johnson said in a statement late Tuesday.

Settlement negotiations were largely driven by Johnson, whose agency includes the Secret Service. However, the deal must still be approved by a judge.

As part of the settlement, the security agency has agreed to modify its promotion process by considering multiple candidates for each position and maintaining records of factors for said promotions, according to The Washington Post. It also agreed to create a hotline for agents to report discrimination and keep a record of discrimination complaints against supervisors when considering them for job promotions.

“This settlement is, simply, the right thing to do,” Johnson said.