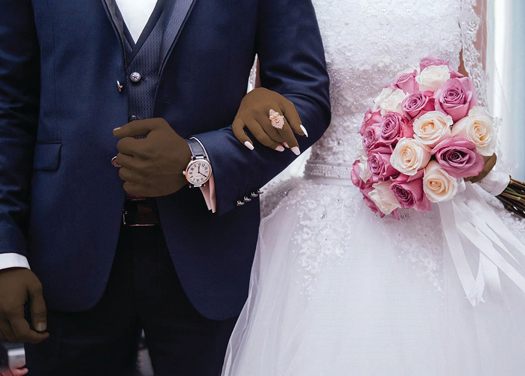 Many agree marriage is a cornerstone to strong families, communities, and nations and say it comes at great cost and not without a fight—especially for Black couples in America.

Celebrating and strengthening this sacred institution through education, information, and highlighting the benefits of marriage are the focus of the upcoming 17th annual Black Marriage Day.

Organizations across the country are planning to celebrate March 22 as Black Marriage Day under the theme “Marriage Changes Things.” Workshops, conferences, and marriage vow renewals are just some of scheduled events.

These numbers prompted Nisa Islam Muhammad to start Black Marriage Day in 2003 with just 30 cities. It grew to over 300 communities across the country in 2019, according to her Wedded Bliss Foundation. This year singles and youth are urged to participate in Black Marriage Day events.

“Once upon a time, when you said family, you were talking about married couples. Times have changed,” said Ms. Muhammad, who is executive director of the Wedded Bliss Foundation and writes for The Final Call. Her foundation helps teens and adults create healthy relationships and marriages to create better outcomes for children.

Black families are very fractured and that correlates to the rise in sexually transmitted infections, out-of-wedlock births, higher crime rates, and a host of other social ills, she argued.

Black married men live longer, are physically healthier, wealthier and have an increased stability employment, among other things, according to Ms. Muhammad.

Black women have more satisfying relationships, greater emotional health, and more wealth when married, she added. They are safer from domestic violence, sexual assault, other violent crimes, less likely to live in poverty, and suicide is less likely, according to Ms. Muhammad.

Nation of Islam Minister Louis Farrakhan’s presence and consistency in raising Black people’s consciousness is contributing to an improved view of marriage in the Black community, according to Student Minister Willie Muhammad of the Nation of Islam’s Muhammad Mosque No. 46 in New Orleans, and author of “The Journey to Get the Love You Desire Begins With You” and “A Message to Single, Courting, Married and Divorced Believers.”

“Changes are taking place, despite being in an environment that is still hostile to Black love. Remember the Devil’s first attack according to scripture was against the family,” added Min. Willie Muhammad. “Many of the issues that negatively impact our community can be traced back to families that are fractured. Remember the Honorable Minister Louis Farrakhan teaches that one of the three sciences they deprived us of was the science of mating, which was and is a direct attack on Black marriage and an overall attack on us as a people.”

“In all of the three monotheistic religions, which claim Abraham as a father—Judaism, Christianity and Islam—the institution of marriage is considered sacred because, according to the scripture, it is instituted by Allah (God). Anything originated or instituted by Allah (God) must be considered by us as Divine or Sacred, and must be respected accordingly,” stated Min. Farrakhan in a lecture titled “The Sacredness of the Institution of Marriage.”

“If we do not give due respect to that which is of Allah (God), we offend Him and, from this offense, a series of offenses take place. Therefore, we must look again at what Allah (God) intended when He instituted marriage among the original parents of the human family. The present view of marriage is so distorted that the relationships and the offspring from such a distorted view becomes a distortion or an aberration,” he said.

High school sweethearts Ayize and Aiyana Ma’at, who have been together for 20 years and married 13 years, began trying to elevate the online presence of Black families and marriages about a decade ago.

Their aim was to make the issues married couples deal with relatable and solvable. The mental health professionals, who were mentored by Ms. Muhammad and her Basic Training for Couples course, began counseling and coaching couples themselves.

The biggest threat to marriage has been what Ms. Ma’at calls “me” thinking in a capitalistic society where people are bombarded by demands for individual achievement and accomplishment.

“Yes, it’s important in terms of people’s personal development in general, but that aspect is so highly emphasized in the United States that for Black people, and Black marriages specifically, it becomes a real threat,” said Ms. Ma’at.

The focus becomes more about what “I” need, want, am trying to get, or am upset or dissatisfied with, and less of a sense of being connected to a greater community, she explained.

“There’s a responsibility that I have to show up and give and serve outside of just trying to get my own needs met,” said Ms. Ma’at. It’s about balance, both and, not me or, she said.

Bilal Quayyum, president of the Fathers’ Day Rally Committee in Philadelphia, was excited to participate in Black Marriage Day, kicking off a reception on March 6.

Ms. Muhammad was the keynote speaker and 18 couples renewed wedding vows before a Christian minister and Muslim imam, he said.

“I know the biggest crisis that the Black community faces is how do we keep families together, how do we unite families, and how do we encourage the man and woman to get married?” said Mr. Quayyum.

“When I started doing the research on Black heterosexual marriage, I was floored by what the data were showing. The state of Black marriage in America was cause for concern. Many Black women, for example were in fragile marriages, unmarried or didn’t have marriage prospects at all. I couldn’t believe it,” said Dr. Stewart.

She saw nothing that took a long view of the problems, so she decided to write a book, which is due out by Seal Press later this year.

Most social scientists and historians date the decline of marriages to the 1950s, but a drastic drop began in the 1960s, and there are various, valid reasons, said Dr. Stewart.

“But what I realized was that we have been dealing with this problem since the first slave ship sailed from the West Coast of Africa, because the majority of women on those slave ships would have been married women with children,” Dr. Stewart told The Final Call. “So, what we have already on the slave ship, is the separation, the fracturing of the African family.”

“When we look at the problem in the context of chattel slavery, enslaved African descendants had no rights to marry. They needed permission to wed from their owners, and they most often could not protect their unions from being torn asunder by sexual assault, sexual breeding, the interstate slave trade and other deals common to the business of owning and managing human property. Although many did marry,” continued Dr. Stewart.

“Marrying one’s heart’s desire was granted at the mercy of slave owners. So much so that they would often say, in their vows when they did marry, we pledge to stay together until death or our master(s) might part us. Literally,” Dr. Stewart noted.

The expansion of the domestic slave trade after the outlawing of American participation in the international slave trade dealt a massive blow to Black marriages, according to Dr. Stewart.

“We have to begin in slavery, if we’re going to examine this problem substantively and address its systemic foundations,” she said. A plethora of structures, policies, and systemic factors impacted upon Black love and marriage after slavery, said the Emory University associate professor.

The federal government denied Black women who were widows of Civil War veterans benefits for which they qualified as women who had been married to ex-soldiers. From 1865-1965, the underside of Reconstruction and the establishment of Jim Crow laws and customs established anti-Black lynchings and massacres. White terror and violence took a toll on Black marriages, which also suffered during the Great Migration to the north, said Dr. Stewart.

“Man in the house,” “suitable home,” and “substitute father” policies of the 1960s severed Black families, she continued. They were advanced as race-neutral policies but were implemented through racist practices at the state and municipal levels, so Black women suffered disproportionately under those policies, which were tied to receiving public housing or benefits, Dr. Stewart explained.

“We often believe we have to reach across racial lines to find examples of forbidden love. Black-White relationships have been forbidden in America for centuries, if not legally then culturally. My argument in this book, however, is that we can look within the Black community and find forbidden love,” Dr. Stewart told The Final Call.

She called issues preventing healthy Black love and marriage deeply systemic, such as mass incarceration. But, she said, when it comes to solutions, all of a sudden, the conversation turns to very personal issues and recommendations.

“Black women should lose weight, acquire a new wardrobe, change their attitudes, in order to compete for the limited pool of Black men out there on the market. Some people are now suggesting, and I treat this in the book as well, that Black women should date interracially,” said Dr. Stewart.

“What about Black women who want to date and marry Black men? The dating interracially solution, for me, is not a substantive solution. It doesn’t get at the foundational causes of the problem,” she said.