(Tennessee Tribune) Juvenile arrest rates have fallen sharply in recent years, but Black youth are disproportionately sent to adult court by judges at some of the highest percentages seen in 30 years, according to a joint report from the Campaign for Youth Justice (CFYJ) and the National Association of Social Workers (NASW).

The new report, ‘The Color of Youth Transferred to the Adult Criminal Justice System: Policy and Practice Recommendations,’ discusses how the egregious practice of prosecuting and incarcerating black youth as adults, which is rooted in our nation’s past and ongoing racism, has had a devastating impact on Black youth and the black community.

Black children sent to adult jails and prisons are more likely to die by suicide, suffer from mental illness, and recidivate once they return to their communities than their peers in the juvenile justice system.

“Research has proven that adults courts and jails are no place for children. The brain development of youth is markedly different from adults and they are more prone to risk taking and not thinking through the consequences of their actions,” said NASW Social Justice and Human Rights Manager Mel Wilson. “Youth involved in the justice system are also more likely to have mental health needs and have suffered from trauma so they need rehabilitation and treatment services that are not provided in most adult jails.”

“This brief dives into the historical context of racial terror inflicted on Black communities that has shaped the foundation of systemic policies, practices, and procedures that compound disproportionality,” said CFYJ Policy Director Jeree Thomas.

“This is a symptom of chronic and systemic racism beyond the confines of the justice system itself, but we believe that intentional advocacy and transformative thinking by social workers, attorneys, youth advocates, and system leaders can begin to redress this issue in states across the country.”

CFYJ and NASW looked at the rate of Black youth who were sent to adult courts in Oregon, Florida and Missouri, three states that report their adult court transfer rates disaggregated by race. 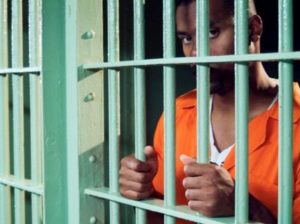 Missouri is one of the first states to urge judges to consider racial disparities before transferring youth to adult courts. Still in 2016, Black youth made up 14.8% of the youth population age 10 to 17, but 72% of youth that judges referred to adult courts, even though they accounted for 40% of youth charged with felony offenses.

CFYJ and NASW encourage advocates and social workers across the country to take action and mobilize against the adultification of Black youth in the criminal justice system.

These actions include: getting local officials such as county government and city council members to recognize the importance of keeping all youth, and especially youth of color, out of the adult criminal justice system; advocating for prosecutors to adopt transparent procedures around the decision to transfer youth to adult courts; passing legislation that would require a look at the racial impact of bills that increase the number of youth who are prosecuted, sentenced and incarcerated as adults; requiring more social workers be part of the defense team of juveniles because social workers can propose treatment and sentencing options that keep youth out of adult courts and jails; and researching and developing community-based alternatives to incarceration for youth who are sent to adult courts.
“The reason why Black youth are sent to adult courts and jails at higher rates are based on generations of institutionalized racism in the United States,” Wilson said.

“Federal, state and local officials must aggressively collect data and review their policies and practices to ensure they are not disproportionately harming Black youth and Black communities.”

“We are seeing that Black males of any age receive more punitive outcomes compared to other groups. For example, in Florida, there is recent research that indicates that Black male youth are more likely to receive a jail or prison sentence rather than community-based alternatives, and more likely to receive a longer jail and prison sentence than their peers,” said Thomas.

“This research highlights the need to continue to address the root causes of disproportionate minority contact and racial and ethnic disparities for youth transferred to the adult system.”