Beta Alpha Zeta Chapter of Zeta Phi Beta Sorority, Inc. new President Karen Britt accepted a five hundred dollar donation from State District 13 Rep. Tracie Davis. Rep Davis presented the chapter with a check for their support of her efforts to create a healthy start for young women, children and babies in the community. BAZ in-house Storks Nest represents over 40 years of partnership with the March of Dimes Foundation. Stork’s Nest aims to increase the number of women receiving early and regular prenatal care in an effort to prevent cases of low birth-weight, premature births and infant deaths.

Zeta Phi Beta Sorority, Inc. was founded January 16, 1920, at Howard University, Washington, D.C.  Since its inception, Zeta has continued its steady climb into the national spotlight with programs designed to demonstrate concern for the human condition both nationally and internationally.  The organization has been innovative in that it has chronicled a number of firsts.  It was the first National Pan-Hellenic Council organization to centralize its operations in a national headquarters, first to charter a chapter in Africa, first to form auxiliary groups, and first to be constitutionally bound to a fraternity, Phi Beta Sigma Fraternity, Inc.   The sorority takes pride in its continued participation in transforming communities through volunteer services from members and its auxiliaries.  Zeta Phi Beta has chartered hundreds of chapters worldwide and has a membership of 100,000+. Shown is BAZ President Karen Britt with State Rep Traci Davis. 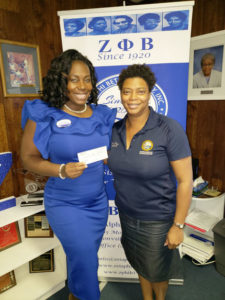