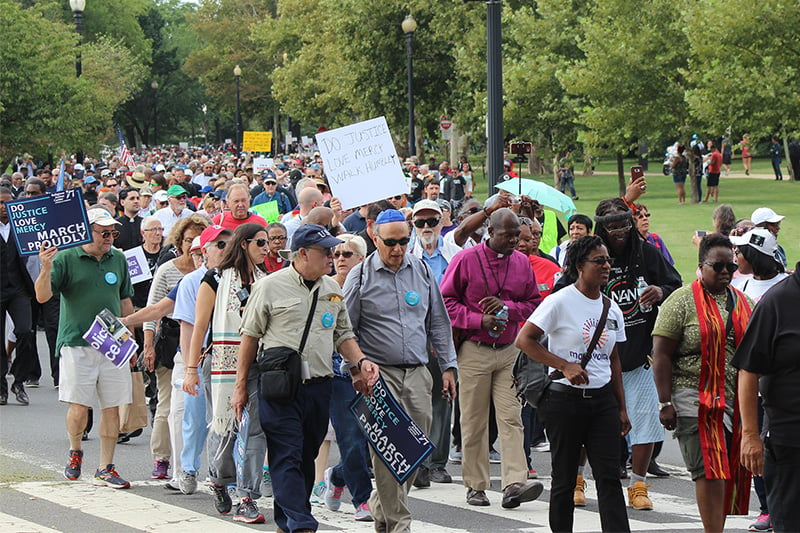 WASHINGTON (RNS) — From Protestant preachers to Jewish cantors to Catholic nuns, religious leaders of a range of faiths demonstrated in the nation’s capital for racial justice, criticizing the silence of some within their own ranks on the subject of white supremacy and questioning the morality of Trump administration policies.

Wearing stoles, robes and yarmulkes, the participants proceeded Monday (Aug. 28) on a 1.7-mile route from the Martin Luther King Jr. Memorial to the Justice Department. Organizers estimated close to 3,000 ministers took part, a larger turnout than suggested by the title of the event: “One Thousand Ministers March for Justice.”

“We wanted to say this nation is in moral trouble,” the Rev. Al Sharpton told those assembled at the King memorial.

One protester carried a sign saying “Repeal and Replace Trump Pence,” a reference to the efforts to halt the Affordable Care Act signed into law during the Obama administration. Another’s sign said “Black Lives Matter To This Rabbi.”

The march was originally planned to protest increased hate crimes, mass incarceration and discrimination and to call on the Trump administration and Attorney General Jeff Sessions to address those issues.

But the recent violence in Charlottesville, Va., where neo-Nazi, white supremacist and white nationalist protesters clashed with anti-racism activists, prompted increased interest in the gathering.

Sister Patricia Chappell, executive director of Pax Christi USA, decried white supremacy but said, as a black Catholic nun, she believes “even our institutional church is racist” and needs to address some of its policies and practices.

Sharpton’s National Action Network spearheaded the march on the 54thanniversary of the March on Washington. Many of the people — from Buddhists to Baptists— had planned to be at the march before the Charlottesville events spurred more to join them. Some speakers ticked off a number of other issues that concern them, such as criminal justice, voter suppression and health care reform.

“You’re going to see the victims of Nazism, the victims of white supremacy march today to the Justice Department,” Sharpton said just before leading the march through downtown Washington. “And say we don’t care what party’s in. We are not going to be out.”

Sharpton said many of the people — from Buddhists to Baptists— had planned to be at the march before the Charlottesville events spurred more to join them.

The Rev. Jamal-Harrison Bryant, an African Methodist Episcopal pastor from Baltimore, criticized evangelical ministers who support and advise the president “and declare erroneously an outright lie — that Donald Trump is a man of God.”

“He is not God’s man,” Bryant said. “They do not reflect the body of Christ at large.” 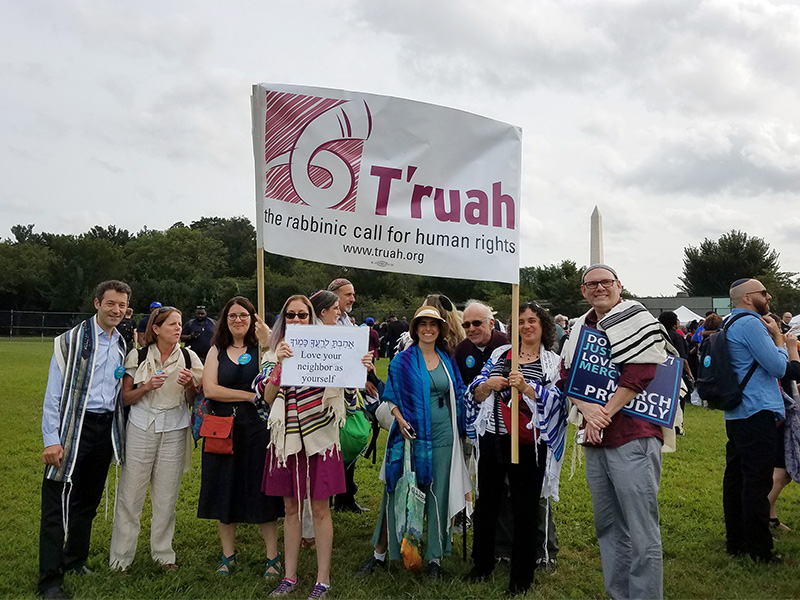 The Rev. Jim Wallis, founder of Sojourners magazine and social justice organization, said the demonstration was “theological” because “the soul of the nation and the integrity of faith” were at stake. He called on clergy to speak out against white supremacy.

“We have to preach from every pulpit in America that racism is America’s original sin,” he said.

Wallis added that Trump should repent for pardoning former Arizona Sheriff Joe Arpaio, who was convicted of criminal contempt for his treatment of undocumented immigrants.

The interfaith crowd took part in a call-and-response conversation with speakers who urged them to sing, recite Scripture and high-five each other in shows of unity.

“Let me tell all the white supremacists and KKK and everybody that America is a multifaith country — Do you all agree?” said Sikh leader Rajwant Singh, who was greeted by cheers. “America belongs to all of us.” 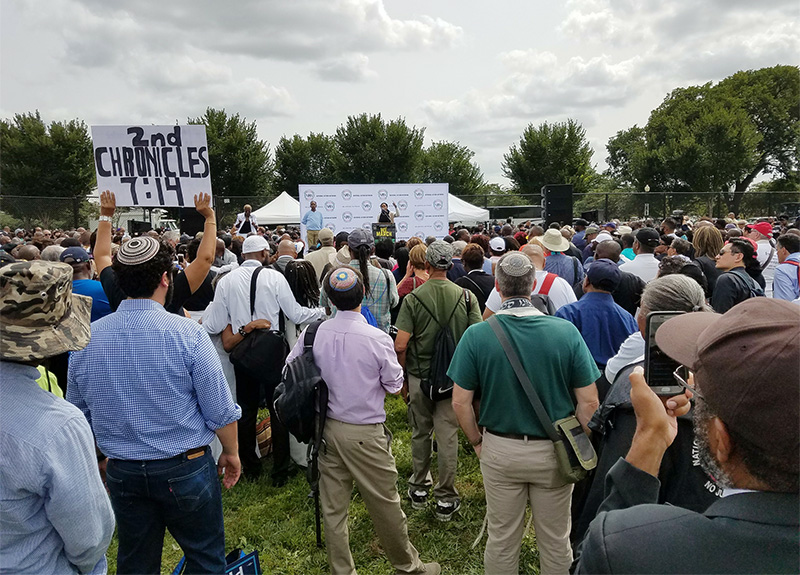 Rabbi Jonah Dov Pesner, director of the Religious Action Center of Reform Judaism, recalled that Jews marched 5,000 years ago “out of Pharaoh’s slavery and bondage in Egypt.”

“And we know today that we do have the power to break the bondage of the modern pharaoh,” he said.

The National Action Network, a predominantly black, Christian organization, also was an organizer of a 50th anniversary commemoration of the March on Washington that was held in 2013 and drew throngs to the National Mall to remember the event that featured King’s “I Have a Dream” speech. Monday’s march originally focused on clergy but some groups encouraged all people of faith to attend.

Some clergy who have supported or advised Trump gathered at the National Press Club instead of at the King Memorial and issued a statement about the need for the government and religious officials to do more to bridge racial divides.

“Naturally, we need government, business, law enforcement, and community stakeholders to partner with us,” their statement read. “The glue that will keep our nation together, though, is the Church and faith leaders.”