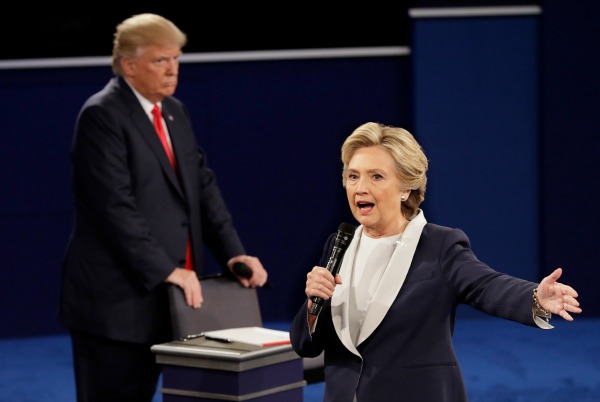 ST. LOUIS (AP) — In a bitter debate filled with tension and insult, Hillary Clinton declared that Donald Trump’s vulgar comments about women reveal “exactly who he is” and prove his unsuitability to be president. Firing back, he accused her of attacking women involved in Bill Clinton’s extramarital affairs and promised she would “be in jail” if he were president.

Trump, who entered Sunday night’s debate desperate to steady his floundering campaign, unleashed a barrage of attacks and continually interrupted Clinton. He repeatedly called her a “liar,” labeled her the “devil” and contended she had “tremendous hate in her heart.”

On one substantive matter, he acknowledged for the first time that he had paid no federal income taxes for many years.

The debate was the culmination of a stunning stretch in the race for the White House, which began with the release of a new video in which Trump is heard bragging about how his fame allowed him to “do anything” to women. Many Republicans rushed to revoke their support, with some calling for him to drop out of the race.

Answering for his words for the first time, Trump denied he had ever kissed and grabbed women without their consent. He said repeatedly that his words in 2005 were merely “locker room talk” and paled in comparison to what he called Bill Clinton’s abuse of women.

“She should be ashamed of herself,” Trump declared. Ahead of the debate, the businessman met with three women who accused the former president of sexual harassment and even rape, then invited them to sit in the debate hall.

Bill Clinton never faced any criminal charges in relation to the allegations, and a lawsuit over an alleged rape was dismissed. He did settle a lawsuit with one of the women who claimed harassment.

On the debate stage, Clinton did not respond directly to Trump’s accusations about her husband or her own role, but was blistering in her condemnation of his predatory comments about women in the tape released Friday.

“I think it’s clear to anyone who heard him that it represents exactly who he is,” she said, adding that she did not believe Trump had the “fitness to serve” as commander in chief.

The second debate was a town hall format, with several undecided voters sitting on stage with the candidates. The voters, all from the St. Louis area, were selected by Gallup.

The tension between Trump and Clinton was palpable from the start of their 90-minute debate, the second time they have faced off in the presidential campaign. They did not shake hands as they met at center stage.

Trump, who is several inches taller than Clinton, stood close behind her as she answered questions from the voters. At other times, he paced the stage, repeatedly interrupting her and criticizing the moderators.

Trump struggled at times to articulate detailed policy proposals, repeatedly dancing around questions about how he would replace President Barack Obama’s health care law, a measure he has vowed to repeal. But he leveled several charges against Clinton that will likely energize his supporters, including saying she should have been criminally charged for her controversial email practices at the State Department.

In a rare public break with his running mate, Trump made clear he did not agree with Mike Pence on how to deal with war-torn Syria. Last week, Pence said the U.S. military should be ready to strike Syrian military targets that are under the command of President Bashar Assad. The threat of military action against the Russia-backed Assad government marks a departure from Trump’s preference for a focus on Islamic State targets.

Said Trump, “He and I haven’t spoken and I disagree.”

Trump’s campaign was already struggling before the new video was released, due in part to his uneven performance in the first presidential debate. Many Republicans saw Sunday’s showdown as his last best chance to salvage his campaign.

It was unclear whether Trump’s performance did anything to expand his support beyond his core backers. He did repeatedly cast Clinton as a career politician who had accomplished little during her years in Washington and would be incapable of bringing about change, one of his strongest arguments in a campaign that has highlighted American’s deep frustration.

“With her, it’s all talk and no action,” Trump said.

Asked in the debate whether that’s “two-faced,” Clinton pointed to Abraham Lincoln, saying he did whatever he could to get the 13th Amendment passed, allowing emancipation of the slaves, by lawmakers who did not support African-American equality.

“I was making the point it is hard sometimes to get the Congress to do what you want them to do. That was a great display of presidential leadership.”

The political firestorm that preceded the debate was sparked by a video obtained and released Friday by The Washington Post and NBC News. In the video, Trump, who was married to his current wife at the time, is heard describing attempts to have sex with a married woman. He also brags to Billy Bush of “Access Hollywood” about women letting him kiss them and grab their genitals because he is famous.

Trump used the revelations as an opening to make good on his repeated promises to throw Bill Clinton’s sexual history into the center of his campaign against his wife. Less than two hours before the debate, he brazenly met publicly in a hotel conference room with three women — Paula Jones, Juanita Broaddrick and Kathleen Willey — who have accused Bill Clinton of unwanted sexual advances and even rape. Kathy Shelton, a fourth woman who appeared with Trump, was a 12-year-old Arkansas sexual assault victim whose alleged assailant was defended by Hillary Clinton.

Trump refused to answer questions from reporters about his own aggressive sexual remarks about women during the meeting.

In the heated debate’s final moments, the candidates briefly put aside their animosity when asked by a voter if they respected anything about each other.

Trump, as if pulling a line directly from the Clinton campaign, called his Democratic opponent a “fighter.”