That’s the story of Rudy Smith from Gretna, LA, one of just 59 people who have achieved the feat of running in every Walt Disney World Marathon since the race was established in 1994, but the only octogenarian among them, having recently turned 80. 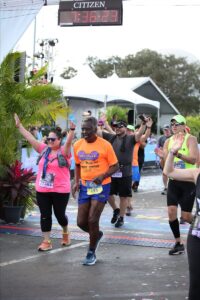 On a clear and warm Sunday morning, he finished the 26.2-mile race, which took runners through all four Disney theme parks, in a little over seven hours.

“Always got to focus on the finish,” he said. “So you take each mile as it comes and whittle it down until you get to the finish.”

To celebrate the achievement, Disney gifted Smith and all the “perfect” runners with a commemorative pennant that was on display on the course.

It is just one more running accomplishment for Smith, an avid marathoner who didn’t take up distance running until his 40s. Smith has run a marathon on every continent, run one on the Great Wall of China and has even run races twice up the Empire State Building plus one in Antarctica. He also completed all six major world marathons after finishing the Berlin Marathon this past September.

Walt Disney World Marathon Weekend is the second of four race weekends during the 2022-23 runDisney season. Next is the 15th Disney Princess Half Marathon Weekend (Feb. 23-26), and then the runDisney Springtime Surprise Weekend (April 13-16). These races, which include runners of all fitness levels, provide the opportunity to run through Disney theme parks, experience world-class entertainment and earn unique Disney medals.