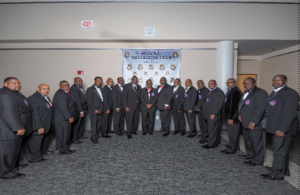 Sweethearts, couples and newlyweds attended the Royal Vagabonds 2019 Sweet Hearts Ball, held on the UNF Campus in the Adam Herbert Building.  Over 300 couples adorned in formal attire enjoyed a variety of activities ranging from dinner and dancing to a buffet including shrimp and grits and a dessert smorgasbord.

This year’s annual event was their most successful to date with over 260 attending in support. Proceeds from this fundraising Event will provide Scholarships to deserving students from Jacksonville who are entering their freshman year of college

Entertainment for the evening was presented by the Special Formula band, playing the sounds of Motown, Jazz and top 40 hits.  Royal Vagabond members proudly entered the ballroom escorting their dates and hosted a program detailing their community efforts to award scholarships to deserving Duval county high school students.  This year, the Royal Vagabonds presented 4K in scholarships to eligible graduating seniors. Scholarship criteria include completing an application, writing an essay and grade point average.

The Royal Vagabond Club was formed in 1928 and incorporated in 1948, as a social and civic organization. The club was organized by professional men in the community with the desire to have a positive presence in the community for Blacks during the years of Jim Crow and segregation. Over the years the club sustained declining membership but has been resurrected in recent years to become once again a positive influence in the Jacksonville community. The two events that drive Royal Vagabond fundraising efforts are their annual Golf Tournament and Valentines Sweetheart’s Ball. Now numbering close to twenty, the Vagabonds vow to continue to make a difference in the community and the lives of people of color.