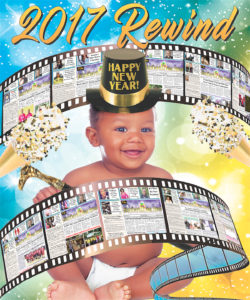 January – January brought a new face to Jacksonville’s congressional representation after decades with the swearing in of Rep. Al Lawson. After missing 20 years as a newborn, kidnapping victim Kamiyha Mobley a.k.a. Alexis Manego, returned to Jacksonville with her adopted mother in chains and met her biological family (shown in photo with mother Shanara Mobley and father Craig Aiken). in the world of social service, the Gamma Rho Omega Chapter of Alpha, Kappa Alpha honored the Free Press’ own Camilla Thompson as a “Diamond Soror.”

February – In February we really started to feel the brunt of Trump’s first month in his presidency. Many of the Super Bowl winning New England Patriots opted out of the customary White House visit. Roslyn Brock stepped down as chairwoman of the NAACP. Former State Rep. Reggie Fullwood was sentenced to six months of home detention for the fraud and tax convictions that forced him out of Florida’s Legislature. The Oscars made history by awarding record-breaking number of black stars Shown is actress Viola Davis, winner of the Best Supporting Actress.

March – The Women’s March on Washington shattered expectations and became the largest single-day demonstration in recorded U.S. history. Estimates showed that the march involved between 3 – 5 million people in America (shown). Donald Trump made what some called a gesture at civil rights by inviting 64 HBCU presidents to the White House. The ‘Bloody Sunday’ March from Selma, AL to Montgomery, AL commemorated 65 years. Fox News host Bill O’Reilly apologized to Rep. Maxine Waters (DCalif.) for saying her hair looked like a “James Brown wig.”

April – NBA All-Star Patrick Ewing Returns to Georgetown as head coach. Florida State Senators Audrey Gibson and Perry Thurston challenged colleague Frank Artiles over use of the N-Word and racial slurs. The media frenzy that followed lead to him resigning from his seat which represented South Florida. Outspoken activist and pastor Kenneth Adkins was sentenced to life in prison for child molestation. The U.S. Mint celebrated the release of a new quarter dedicated to abolitionist Frederick Douglass.

June – In June, beloved comedian Bill Cosby went on trial for a 2004 incident for a woman who claimed the star drugged and raped her. The Free Press’ Charles Griggs was elected Southern Regional Representative for 100 Black Men of America. Former senator Arnette Girardeau was inducted into the Florida Civil Rights Hall of Fame (shown). The national NAACP voted to dismiss its president, Cornell William Brooks, in what it called a “system-wide refresh.”

July – The Jacksonville Public Library discover a sculpture buried deep in its archives is an original sculpture by acclaimed artist Augusta Savage. Essence Magazine goes up for sale. President Trump has the lowest approval rating in history. Attorney General Jeff Sessions announced a plan to facilitate police department seizures of cash and property from crime suspects. The I’m a Star Foundation joined forces with JTA to combat the food desert epidemic by opening a famers market at the main bus terminal.

August – A violent, white supremacist rally in Charlottesville left one woman dead and 35 injured after a car plowed down multiple people who were protesting the “Unite the Right” rally on Aug. 12, 2017. The aftermath was an all out attack on confederate statues around the country including here in Jacksonville (shown). Local men from the Dozier School for Boys who claimed they were used as slaves, abused and raped fought for monetary compensation through the legislature.

September – The biggest story of the year effecting Jacksonville was the devastation left by Hurricane Irma. The category 5 storm left 134 dead and caused damage upwards of $100 billion. Councilman Reggie Gaffney raised eyebrows where he and Councilwoman claimed racism after a police recorded traffic stop for driving a car with a license plate he had reported stolen. The Jacksonville Jaguars were among many teams who “took a knee” during the National Anthem in support of civil rights.

October – O.J. Simpson (shown) was granted parole on Oct. 1, 2017, after serving nine years for his involvement in an armed robbery in Las Vegas, later that evening, a gunman opened fire on a crowd of 22,000 killing 59 and injuring more than 515. The firestorm around the accusations of Hollywood movie producer Harvey Weinstein ignited a movement and scores of women and men across the world shared their harrowing stories of abuse on social media using the hashtag #MeToo.

November – Jacksonville’s Faith community joins together for prayer walk to advocate for predatory lending protections. Sen. Audrey Gibson is chosen to lead Florida’s Senate Democrats. Prince Harry and Meghan Markle (shown) announced their royal engagement, adding a bit of color to the British monarchy. The NAACP issued a travel advisory against American Airlines. Civil rights activist Jesse Jackson announces he has Parkinson Disease. For the first time in almost 20 years, the Grammys have not nominated any white men in the Album of the Year category.

December – The Jaguars make the playoffs after more than 10 years to the delight of fans (shown) who have risen to the occasion in rain, sleet, snow and heat. President Donald Trump has nominated white men to America’s federal courts at a rate not seen in nearly 30 years, threatening to reverse a slow transformation toward a judiciary that more closely reflects the nation’s diversity. Congressman John Conyers resigns after decades in office following sexual harassment allegations. Democrats pull off a big win in Alabama reclaiming a Senate seat by Doug Jones.