At the height of the civil rights movement, the NAACP was instrumental in developing strategies throughout the South to end segregation, lynchings and blatant economic inequalities.

Today, the organization is still no stranger to fighting for the rights of people of color and citizens facing injustice.  For over 15 years, current president Isaiah Rumlin has led the Jacksonville Chapter of the NAACP.  While Rumlin has provided stability to the organization, some have said that it is time for a change.

On November 8th, ironically two years after state and national midterm elections, Jacksonville NAACP will hold local elections for officers. Members will have the opportunity to cast their vote to remove the current administration and elect a new governing body or support current leadership.

A local pastor, Reverend R. L. Gundy, who has been active in the fight for civil rights and has held several leadership positions with organizations like the Southern Christian Leadership Conference, has decided to challenge Rumlin.

As pastor of Mt. Sinai Baptist Church, Gundy boasts a four-page resume that details his career as a religious leader, retired military veteran and activist.  In contrast, Rumlin is a local businessman member of the JTA Board of Directors that has been directing the path of the local NAACP through various challenges and successes.

Rumlin touts his record of leadership and most recently is proud of his role in assisting with the committee to select recently appointed Duval County Public Schools superintendent Dr. Diana L. Greene.

While critics may disagree, Rumlin’s supporters praise his successes and strongly suggest that he has unified the community. The presidency of the organization has not been challenged since former head, Fred Matthews unsuccessfully ran for the position against Rumlin 15 years ago.

Each candidate asserts that their platform is the blueprint to lead the community for the next two years. Gundy is adamant that his leadership, passion and experience will be the saving grace for the local NAACP as it continues to fight to remain relevant. The pastor also proudly recalls that at the age of seven, he met his hero, Civil Rights icon and NAACP President Rutledge Pearson.   Gundy insists that his platform will be the formula for social justice change, and he will build bridges between community, government, businesses, entrepreneurs and the faith-based community.

This crucial election will could be a turning point for the organization no matter who wins.  Founded in 1909, the NAACP is the nation’s oldest and largest nonpartisan civil rights organization. 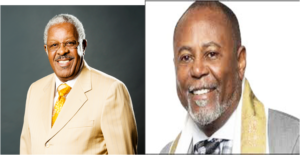