Breaking news
With less than 10 days until the primary election, the Hillsborough County NAACP hosted a gubernatorial forum in Tampa last Saturday. All five candidates confirmed their attendance — but four of them stood up the organizers, the 20 community groups involved and the more than one hundred people in attendance. The only candidate who showed up to speak was Tallahassee Mayor Andrew Gillum, the only African-American candidate in the race. All four other candidates refused to attend the event.
Gillum talked unapologetically about his progressive record as Mayor, including reforming the criminal justice system to “Ban the Box” and lowering crime to a five-year low. He has proudly worked with President Obama to train workers for high-tech jobs, and he is campaigning on a platform of raising teacher and staff salaries, increasing the minimum wage to $15 an hour, creating better-paying jobs with dignity in Florida, and legalizing marijuana so we can invest more funding in our public schools. Shown is Gillum seated alone for the one man forum. 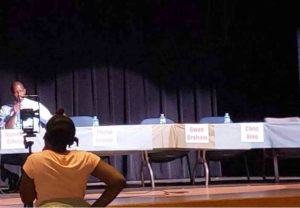