The young men had the opportunity to interact with minority business executives to explore various career paths and learn the educational benefits of various military branches. The theme was “The Importance of Post-Secondary Preparation.”

Students attentively listened to representatives from the maritime, National Guard, army and navy branch of services. Local college admission staff from the University of North Florida and Edward Waters College was also in attendance to provide info on achieving success as a college graduate.  Students partook in a catered luncheon, visited vendor booths and were awarded certificates for outstanding citizenship and excellence.

“You have to stay the course. You can’t waiver or deviate from your chosen career path or vision.  One wrong turn could mean a lifetime of woes.  Either a jail stint or unhealthy decisions can leave you destitute. You have to keep your eyes on the prize, stay focus on yourself and not those girls too,” said Terry laughing.

5000 RMOE Supervisor Lawrence Hills remarked,  “The event takes into consideration that not all students are bound for a 4-year university, yet there are still multiple paths to becoming a successful tax paying adult citizen.  We have partners that have chosen to present to students about programs that don’t require a four year degree but still afford you the opportunity to make a good and honest living.”

The 5000 Role Models of Excellence Project became a new program during the 2015-2016 Duval County school year. It serves 10 Duval middle and high schools with plans to recruit 5,000 community mentors over a 10 year period to serve as role models for young African-American males. Young men from grades 6 – 12 participate in various cultural and educational experiences such as visits to college campuses, etiquette workshops, job and career building training. Students also serve as ambassadors for the program and the school district throughout the City of Jacksonville. 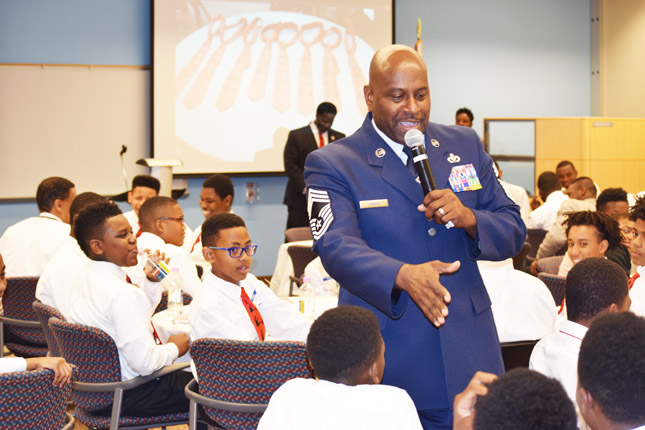