Many Jacksonville residents are unaware that Douglas Anderson (DA) School of the Arts was named and spearheaded by community leaders and activists Douglas Anderson (1884-1936) and W.R. Thorpe (1893-1967). Anderson,  a graduate of Tuskegee Institute, began the first free school bus service for the school and was president of the Parent-Teachers association.

The school first opened in 1922 as primary school #107 specifically for African American students  grades one through nine. In 1945,  the school board renamed the school the Douglas Anderson School. It became a high school in 1955 and quickly became an educational and cultural mecca from communities from all over southeastern Duval County.  During the 1950s, the school morphed into a high school with the mascot of “Fiery Dragons”.

Community involvement was the strength of the school. Even though high school enrollment never exceeded 400-500 students, they achieved prominence in academics, athletics and the arts far beyond their numbers. Douglas Anderson School closed in 1968 as a result of school desegregation.

The following years brought many changes including serving as a campus for Florida Junior College and a 7th grade center. It reopened in 1985 as the renovated magnet Douglas Anderson School of the Arts. In December 2009, the school became a Florida Heritage Landmark by the Bureau of Historical Preservation. The ceremony was attended by students and school officials , Anderson’s family and the first graduates of the San Marco area school from 1959.

This year, the Douglass Anderson Class of 1968 hosted “DA’s 40th Grand Reunion” at the Doubletree Hilton in downtown Jacksonville. Hundreds of classmates, former teachers, family and friends reminisced about the school’s culture, history and legacy.  Living legend and former DA coach, Nathaniel Washington proudly welcomed all graduate classes and even began a spiritual soul train line on the dance floor. Classmates beamed with pride as they passed a 1968 yearbook, sang the class song, participated in the annual class roll call, raffle and enjoyed a soul food buffet.

The Class of 1968 celebrated 50 years of friendship, marriages, sweethearts and the chance to give thanks for a legacy that will resonate for years to come.  Committee member, Lorraine Lee, smiled, “We have a sense of community. Many students came as far as the beaches to attend class.  During the days of segregation, we were determined to be better, do better and give thanks for our parents, family and friends that we played with every day.  We are truly thankful,” said Lee. (Tonya Austin Photo) 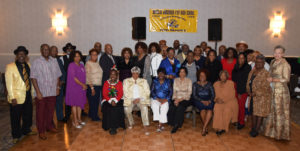