Breaking news
In 1977, with just four months left, NASA was struggling to recruit scientists, engineers and astronauts for their new Space Shuttle Program. That is when Nichelle Nichols, Star Trek’s Lt. Uhura, challenged them by asking the question, “Where are my people?” With NASA’s backing, she embarked on a national PR blitz, recruiting 8,000 of the nation’s best and brightest, including the trailblazing astronauts who became the first African American, Asian and Latino men and women to fly in space. This is her—and their—story. 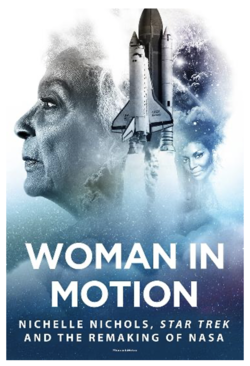 In addition to Nichols, “Woman In Motion” features notable celebrities, activists, scientists and astronauts including Neil deGrasse Tyson, George Takei, Pharrell Williams, Martin Luther King III, Al Sharpton, Vivica A. Fox, Walter Koenig, Rod Roddenberry, Michael Dorn, Guy Bluford, Charles Bolden, Ivor Dawson, Frederik Gregory, and Benjamin Crump.
Following the feature presentation, fans will be treated to an exclusive behind the scenes documentary about the making of Woman in Motion, which includes additional interviews with Nichols and other notable guests from the documentary, deleted scenes and additional footage from the making of the film.
View the trailer here: https://youtu.be/e4SNRAnAe-E
“Woman In Motion” is showing at the following local movie theaters on Tues., Feb. 2:
For participating locations and tickets visit www.fathomevents.com  or visit www.solters.com