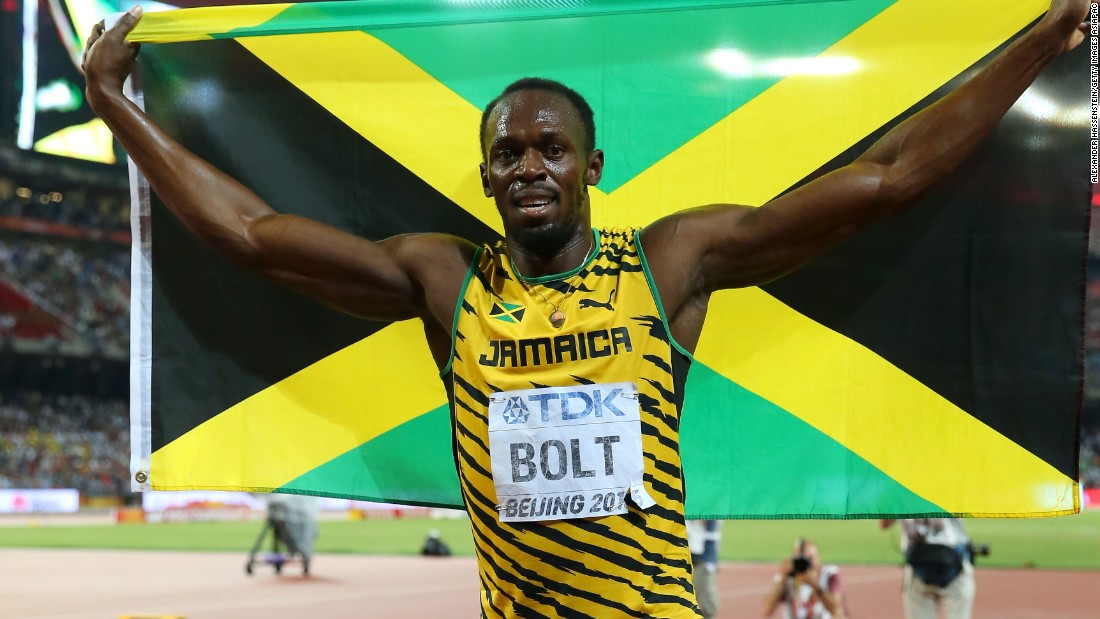 Usain Bolt? Nobody has been a match for him, on or off the track.

The man who reshaped the record book and saved his sport is saying goodbye. His sprints through the 100 meters and Jamaica’s 4×100 relay at the world championships, which begin Friday, are expected to produce golds yet again, and leave track with this difficult question: Who can possibly take his place?

Though he will not retire undefeated, Bolt stands in the rarest of company: an athlete who was never beaten when the stakes were greatest. And with a showman’s flair as transcendent as his raw speed — Chicken McNuggets for dinner, his fabled “To The World” pose for dessert and dancing away at nightclubs till dawn — he hoisted his entire, troubled sport upon his shoulders and made it watchable and relevant.

Since his era of dominance began in 2008, Bolt went undefeated at the Olympics — 9 for 9 — in the 100, 200 and 4×100 relay. (One of those medals was stripped because of doping by a teammate on the 2008 relay team.) He has set, and re-set, the world records in all three events. His marks of 19.30, then 19.19, at 200 meters, were once thought virtually impossible. He set a goal of breaking 19 seconds in Rio de Janeiro last summer, and when he came up short, it became clear the barrier will be safe for years.

At the world championships, Bolt’s only “loss” came in 2011, when he was disqualified for a false start in the 100 meters. Jamaican teammate Yohan Blake won the title that year, as well as the Jamaican national championships at 100 and 200 meters leading to the London Olympics. Heading back to London five years later, Blake is an afterthought.

And Bolt’s mastery of this sport remains unchallenged.

“I’ll be sad to see someone like him go,” said America’s Justin Gatlin, Bolt’s longest and sturdiest challenger, who has been disingenuously portrayed as the brooding bad boy set against Bolt’s carefree party guy. “He’s such a big figure in our sport. Not only is he a big figure, but the kind of guy who always will be a competitor when he steps onto the line.”

Though it’s tricky to compare dominance in track to that in any other sport, there’s an element of Nicklaus in Bolt’s dominance. Impressive as his 18 major championships are, Nicklaus’ 19 second-place finishes and 73 top-10s spoke to his ability to get into the mix in most of the majors over the quarter-century while he was collecting titles. Nicklaus had to fend off Palmer, Watson, Johnny Miller and a dozen other legitimate contenders at every event. Bolt hasn’t faced anything like that.

At the worlds two years ago, Gatlin had Bolt beaten in the 100 but leaned in at the finish line a microsecond too early. Bolt passed him and won by 0.01 seconds. The American all but admitted he psyched himself out.

Speaking to the pressure of racing someone such as Bolt, the Scottish sports historian and former Olympic coach Tom McNab compared sprinting to running in a tunnel.

“And once you become aware of what’s happening outside your tunnel, you’re in trouble,” he said.

In boxing, Ali wasn’t necessarily unbeatable, but he was incomparable as both a sharp-witted showman and an athlete with a social conscience, using his platform to preach tolerance and oppose war.

Bolt hasn’t sought that sort of impact, at least not yet, but it’s hard to overstate the mark he made on his troubled sport and, thus, the Olympics, which have long featured athletics as the must-see event of the final two weeks.

Over years and decades, the showcase sport of the Olympics has devolved into a sordid litany of doping scandals. The latest concerns widespread corruption and cheating in Russia, and heading into Rio, it undermined not only the sport and its managers, but the Olympics and their leaders’ willingness to deal with it.

But when Bolt sauntered onto the track, flashed a peace sign and blew a kiss to the crowd, all was forgotten. Not just for the 9, or 19, seconds while he was running, but for the entire evening and beyond. He made track, and thus, the Olympics, eminently watchable.

He’ll do it one more time on a smaller stage — track’s world championships — but a stage with plenty of symbolic meaning.

When he headed to London for the Olympics in 2012, Bolt held all the records, but was portrayed as vulnerable, following the false start, a long list of nagging injuries and his losses to Blake.

By the time he left, he had pretty much anointed himself as the greatest. Four years later, he said that was precisely his goal: “To be among Ali and Pele,” he said.

He’s on that list, but when the lights go out after the relays Aug. 11 — 10 days before his 31st birthday — it will be time to say goodbye.
“Once he’s gone,” McNab says, “there’s no major personality that would make any significant impact at the world level.”
___
AP Sports Writer Pat Graham contributed to this report.