The Navy enlisted a six-person working group to recommend changes to grooming standards, based on feedback from their peers. As part of the decision, ponytails, buns and other styles will also be permissible for women in uniform so long as they don’t interfere with a sailor’s operational or safety needs. Male sailors are still required to keep their hair short.
Petty Officer 1st Class Jacqualynn Leak, a member of the working group, has worn dreadlocks since 2014. She led efforts to reverse the ban and says her fight involved years of research on the cultural and health aspects of wearing locs. She also surveyed dozens of female sailors affected by the ban. 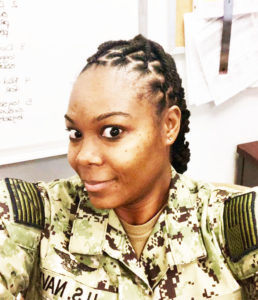 “I wanted to make an argument so compelling that every reason my chain of command could give me for why dreadlocks were banned could easily be rebutted with facts,” she said.

Before, Leak opted to cover her shoulder-length dreadlocks by wearing a wig, which she says became more difficult as her hair grew. Options were even more limited for other female sailors. Some were forced to choose between cutting off their dreadlocks in favor of chemically straightened hair, or facing harsh punishment.

The decision makes the Navy the last branch of the military to drop grooming regulations that prohibit dreadlocks. The Marines first approved locs for women in 2015, and the Air Force announced late last year that dreadlocks would become an approved hairstyle after a review by its uniform board. The Army authorized dreadlocks for women earlier this year after having previously banned them since 2005.