NNPA NEWSWIRE — By  Nsenga K. Burton Ph.D.,  NNPA Newswire Culture and Entertainment Editor – (Source: www.blackpressusa.com) – Executive Producer and Alpha Kappa Alpha member Kimberly Esmond Adams believes anytime is the right time to tell this type of American story. “This story talks about the role that a group of college women, who were still finding their way in the world, yet were intelligent enough to understand that the world was bigger than them and they could do something concrete to make it better for everyone.”

Twenty Pearls endeavors to add the voices of Black women game changers to the national narrative, that are often suppressed.

Alpha Kappa Alpha Sorority, Incorporated® is the nation’s first sorority for Black college women. Founded on the campus of Howard University in 1908, nine visionary women created a sisterhood committed to serving the African American community and elevating issues impacting women and girls. Forty-five years following emancipation and in the face of great racial and gender discrimination, these young women decided to become the change they wanted to see, creating an influential sisterhood and legacy that is culturally relevant today.

Produced by Coffee Bluff Pictures, Deborah Riley Draper’s production company, Twenty Pearls takes viewers on a journey into the lives of Black women creating change at a critical moment in American history.  Draper, an award-winning documentarian who is also a member of the sorority, takes pleasure in being able to tell this universal story about the women who founded an organization that is still making change today.

“The reach of Alpha Kappa Alpha into American society is at every level,” says the NAACP Image Award nominee. “When you get a mammogram, get a scholarship to further your education, attend an HBCU among many other good things, the women of Alpha Kappa Alpha have had something to do with it,” says Draper, who pledged the sorority as an undergraduate at Florida State University.  Draper considers it a privilege to make this documentary. “It’s an honor to elevate the stories of Black women who have influenced American society using the tools I know and love.” 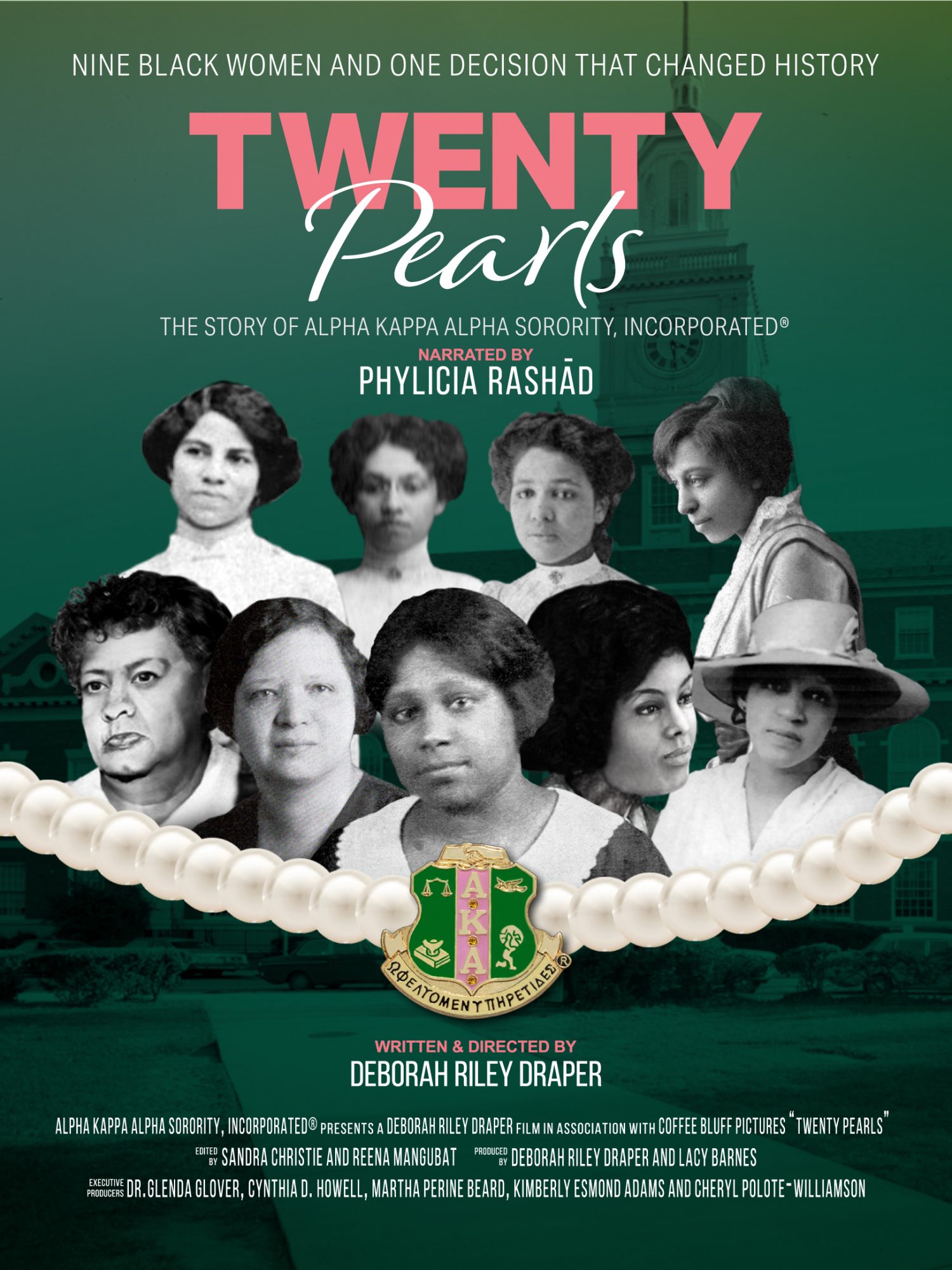 Twenty Pearls tells the universal and historic stories that surround the founding of the sorority and also the intimate stories of some of its members.

While Twenty Pearls is clearly a passion project for Riley, it is also in line with the type of historical work the storyteller creates as a celebrated documentarian. In 2016, Variety Magazine named Draper to its “2016 Top 10 Documakers to Watch“ list. Draper’s 2016 documentary, Olympic Pride, American Prejudice, which tells the untold story of 18 African Americans who defied Hitler and Jim Crow in 1936, was a 2017 nominee for the NAACP Image Awards Outstanding Documentary Film and qualified for the 2017 Academy Awards.

Draper’s debut documentary film Versailles ’73: American Runway Revolution is the first intimate look at the infamous Palace of Versailles fashion show fundraiser, which catapulted the American ready-to-wear to global prominence. In the film, Draper centers the narrative on African American models like Pat Cleveland, Norma Jean Darden, Alva Chinn and Charlene Dash, who made fashion history while changing the industry simultaneously. Draper’s work goes beyond documentaries, with advertising campaigns for Lamborghini, Coca-Cola Classic, FedEx and Adidas. She has earned two regional Emmys, a Gold Effie award and several American Advertising Awards and is currently in pre-production on a number of fictional films. With all of the projects Riley could have done, particularly following the critical success of Olympic Pride, American Prejudice and Versailles ’73, the documentarian decided to tell the story of nine Black women at an HBCU whose vision helped uplift the Black community and make the world better for women and girls in the process.

“I chose to tell this story because it is an important story about this country,” says Draper. “In this documentary, we see the evidence of the 113 years of the impact of AKA in all aspects of American life and that is a story that needs to be told.”

The timing is right as America is in the midst of a contemporary civil rights movement that saw the rise of the nation’s first Black and South Asian woman to the Vice-Presidency, Kamala Harris, a member of Alpha Kappa Alpha Sorority, Inc. who pledged as an undergraduate at Howard University.

Executive Producer and Alpha Kappa Alpha member Kimberly Esmond Adams believes anytime is the right time to tell this type of American story. “This story talks about the role that a group of college women, who were still finding their way in the world, yet were intelligent enough to understand that the world was bigger than them and they could do something concrete to make it better for everyone.” “In many ways, the story is universal because any number of groups can relate to that challenge,” adds Adams. “This film teaches you about American history, the significance of the entire Divine Nine [historically Black fraternities and sororities] and HBCUs, the importance of community, the oneness of purpose and how you can leverage these connections to make life better for everyone.”

The coming together of the film was “fortuitous,” says Adams, who pledged as an undergraduate at Howard University. She remembers having a conversation with Dr. Glenda Glover, the national president of Alpha Kappa Alpha Sorority, Inc.® and current president of Tennessee State University, an HBCU in Nashville, about wanting to make a film that memorialized the importance of the sorority and HBCUs. “Thankfully we have a president who is a visionary and planted the seed for this project to tell our story and the story of HBCUs,” says Adams. Shortly thereafter, Adams was invited to attend a short film screening at BronzeLens film festival in Atlanta and was so moved by the film, she talked with the director afterwards. The director was Deborah Riley Draper. The rest you can say is history. “This film started with a seed planted by Dr. Glover. To see something go from an idea and crystallize into a film that is going to be distributed on every platform in the country is amazing. We made a movie,” chuckles Adams.

Twenty Pearls tells the universal and historic stories that surround the founding of the sorority and also the intimate stories of some of its members. Dr. DeRetta Rhodes, a member of Alpha Kappa Alpha, who is featured in the documentary, was excited to be included in the film because of the importance the sorority holds in her life and the community, says the HBCU alum. “I am a legacy member. I watched my mother pledge grad chapter when I was 15 and I knew I wanted that shared experience with her,” says the EVP/Chief Human Resources Officer for the Atlanta Braves Organization. “When you think about the impact our sorority has had in this country with various civil rights and social justice movements, the fact that many dynamic Black women are a part of that legacy of service is also powerful,” adds Rhodes.

Twenty Pearls endeavors to add the voices of Black women game changers to the national narrative, that are often suppressed. “In this film, we see the evidence of the 113 years of AKA in all aspects of our American society,” adds Draper. “In many of our classrooms, we are required to learn a version of American history that is presented to us. We are now well aware there are other parts of our history that have been omitted, minimized and in some cases completely eliminated from the narrative which does not serve us well,” says Adams.

“Until we learn to embrace the contributions that all of us have brought to this nation, we’ll never realize the fullness of who we can be as a country.”

Twenty Pearls premieres Friday, March 26, 2021, at 8:00 PM (EST) on Comcast Xfinity Black Experience and Comcast Xfinity platforms, xfinity.com, XfinityFlex internet and Xfinity Mobile. The premiere will be followed by a virtual conversation with the cast and crew. The documentary will be available nationwide On Demand, starting March 30 on all other cable systems. Check your local cable guide for channel information.