Ribault High School alumnus graduate Rennia Davis was recently selected 9th overall in the 2021 WNBA Draft. She was selected by the Minnesota Lynx in the first round of the Women’s National Basketball Association (WNBA) draft. Due to the pandemic Davis had a virtual seat to the WNBA teams sharing the moment with the world. Former teammates, coaches, family and friends waited for the selection and became ecstatic when her name was called.

During her court playing time at the University of Tennessee (UT) Davis was one of only four players in Lady Vol history to rank in the career top 10 in points, points per game, rebounds and 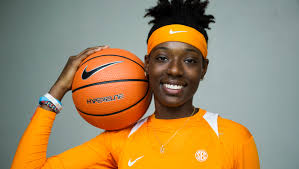 rebounds per game. At Ribault Davis was Florida Miss Basketball (2017) and McDonald’s All-American (2017). Davis graduated from UT in May 2020 with a degree in hotel, restaurant and tourism management with a minor in business administration. Her aspirations are to someday own a restaurant.