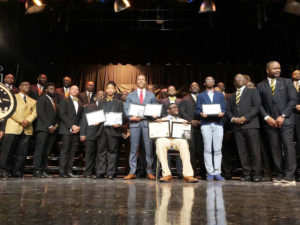 The movie, “The Great Debaters” is a 2007 American biopic period drama film directed by and starring Denzel Washington and produced by Oprah Winfrey. One of Washington’s most famous lines from the movie was, “Debate is combat. Your words are your weapons.”

Participants spoke on the following topic: “In Martin Luther King’s letter from the Birmingham Jail, he stated that one not only has the legal, but also the moral responsibility to obey just laws.  Conversely, one has the moral responsibility to disobey unjust laws. Identify an unjust law in society today and explain an acceptable change or alternative to the law that would make it a just law.”

Dr. King certainly would have been proud to hear the young black men that elouquntly addressed the subject matter.  Jordan Brown, who was the first place winner focused his essay on the recent gubernatorial election in Georgia in which the Secretary of State who oversaw state elections was also running for Governor.  In his view, this created voter suppression in the state and created an unfair playing field

Of course, at the same time Andrew Gillum became the first African American gubernatorial nominee in the state of Florida.