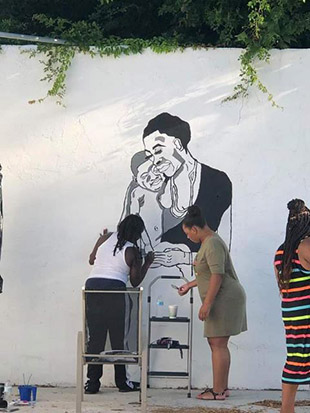 The Durkeeville neighborhood, west of downtown Jacksonville was once home to some of the city’s most prominent African American families.  The community’s mostly red brick homes were its signature and many of those homes still hold their character today.

The area was named after Joseph H. Durkee, a former Union officer during the American Civil War. Durkee settled in Jacksonville, where he became a prominent businessman, politician and land owner who sold a portion of his land in the 1930s for development one of the city’s first public housing projects.

Fast forward to 2019, and the neighborhood is in transition and struggles with blight and crime. A native of Chicago who also served in the military, business owner BSun planted his roots in the community and began focusing on transforming his adopted Durkeeville neighborhood.

This past weekend, BSun Arts and Culture Center located on the Myrtle Avenue business strip presented a free public event entitled ‘Black Art Effect,’ where local painters free styled their personal paintings on the walls inside and outside of the building. Gallery founder, BSun has owned the center for three years and in the midst of remodeling decided to paint the center with creative paintings from local artists.

Shown is Gallery owner BSUN and artist Larresha Jackson with her ‘I am a Black Woman,” painting.