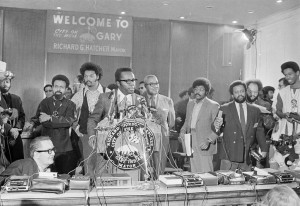 In March of 1972, over nine hundred political activists descended on Gary for an event that would help shape the future of Black politics for decades to come.

Among the crowds was the Who’s Who of Black America: Julian Bond, Jesse L. Jackson Sr., Carl Stokes, Louis Farrakhan and Barbara Jordan.

During that time, America was cooling from the tumultuous Civil Rights Movement and Blacks around the country were enjoying new freedoms as a result of numerous marches and bloody protests. During that time, the attention was on Vietnam, where thousands of Blacks fought in an unpopular battle that left thousands of Americans dead.

The success of the Civil Rights Movement kept the spirit of Blacks up and opportunities flowing for people of color. The National Black Political Convention was hailed as the event that led to more Black political leaders in the United States since Reconstruction.

The Black pride of Gary’s past and present will come together this summer when the National Black Convention returns to the city where it all began.

Anticipation of the historic event has been building since the announcement was made by Freeman-Wilson last year. She joined Hatcher in remembering the late Newark, NJ Mayor Amiri Baraka and the late Congressman Charles Diggs Jr., to mark the special occasion.

The convention will be held June 9-12 at the Genesis Convention Center. All of the heavyweights from the 1972 National Black Convention will be there, including Hatcher, Tuskegee, Alabama Mayor Johnny Ford, and Amiri’s son, present Newark, NJ Mayor Ras Baraka. Freeman-Wilson and a host of today and tomorrow’s Black leaders are expected to attend the festivities.

Hatcher credits both Ford and Baraka as the ones who advocated for another convention. “It was Mayor Baraka and Ford who came to me last year and said we needed to do it (the convention) again. They said there are a lot of issues facing our people around the country and it’s time to come together again in Gary,” said Hatcher.

While the first convention focused on political empowerment, this convention will have a broader agenda that includes economic justice, drug and welfare laws along with the disproportionate number of Blacks who have been incarcerated.

The Voting Rights Act of 1965 and the lingering income disparity between Blacks and their counterparts will also be discussed. Issues affecting law enforcement is also on the agenda.

The issues facing young African Americans will be discussed during the three-day conference. Hatcher says that all are welcome to participate. He also said he looks forward to the involvement of Black Lives Matter.