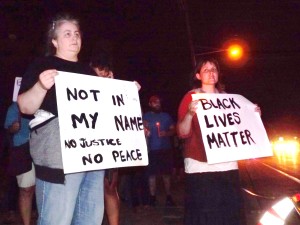 The immediate aftermath of the shooting was posted live to Facebook by Diamond Reynolds who was seated next to Castile as a policeman shot and killed him.

Reynolds identified Castile as her boyfriend. In a graphic video with Castile bleeding while seated next to her, she said the car was stopped for a broken taillight. Reynolds’ four-year-old daughter was in the back seat of the vehicle at the time of the shooting.

According to Reynolds, Castile alerted the officer that he had a licensed handgun and the officer asked him for identification and when he tried to produce ID the officer shot him several times.

At this time police officials are not commenting saying the incident is part of an ongoing investigation.

Almost immediately after the video was posted, a large crowd of protested gathered alongside Larpenteur Avenue near Snelling Avenue – the location of the shooting. Many were somber, holding signs and candles while others were highly vocal, yelling to the police who were on scene investigating the shooting.

“I don’t know that man from Adam, but I’m hurting. That could have been me,” yelled Devonta Brown. Brown then produced his Minnesota permit to carry card and said “This card don’t mean a damn thing if you’re Black, not a damn thing.”

Protesters remained on the scene until investigators concluded their work, approximately 1:45 a.m. Thursday morning. Many in the crowd moved from the sidewalk to the street blocking the tow truck that was carrying the car in which Castile was killed.

This shooting comes just one day after the video captured police killing of Alton Sterling in Baton Rouge, La. In that incident the Justice Department immediately launched an investigation to see if the shooting rose to the level of a criminal violation of Sterling’s civil rights.

The officers in Baton Rouge are white and Sterling was Black. Castile was Black. It is not yet clear the ethnicity of the officer who shot Castile, but Reynolds described him as being Asian.