Breaking news
Mark Medina –  Back when he shocked the world and announced he was diagnosed with HIV, perhaps only Magic Johnson truly believed he would still be alive. Johnson has been proved correct for just over 29 years and counting.

“The reason I’m still living is early detection,” Johnson said Thursday on CNN. “I had a test and I had a physical. It came up that I had HIV, and that saved my life.”

Johnson did not appear on CNN just to reflect on the moment he announced on Nov. 7, 1991, that he would retire from the Los Angeles Lakers after learning he contracted the HIV virus that causes AIDS. He also appeared to discuss the novel coronavirus pandemic.

First, Johnson offered some context: “When I think about this virus, it is completely different.”

Nonetheless, Johnson still drew parallels between HIV and COVID-19 because of the similarities regarding the misconceptions about the respective viruses, the inadequate testing, the lack of available drugs and how the pandemic has hurt the black community.

“African Americans are leading in terms of dying from the coronavirus and most of them in the hospital are African American,” Johnson said. “We have to do a better job as African Americans to follow social distancing, stay at home and make sure we educate our loved ones and our family members and do what we’re supposed to do to keep safe and healthy. Then when you add that up, we don’t have access to health care, quality health care. So many of us are uninsured. That also creates a problem, too. Just like it did with HIV and AIDS.”

Consider the common perception about HIV when Johnson learned he first had it.

“When I announced, it was considered a white, gay man’s disease,” Johnson said. “People were wrong. Black people didn’t think they could get HIV and AIDS.” 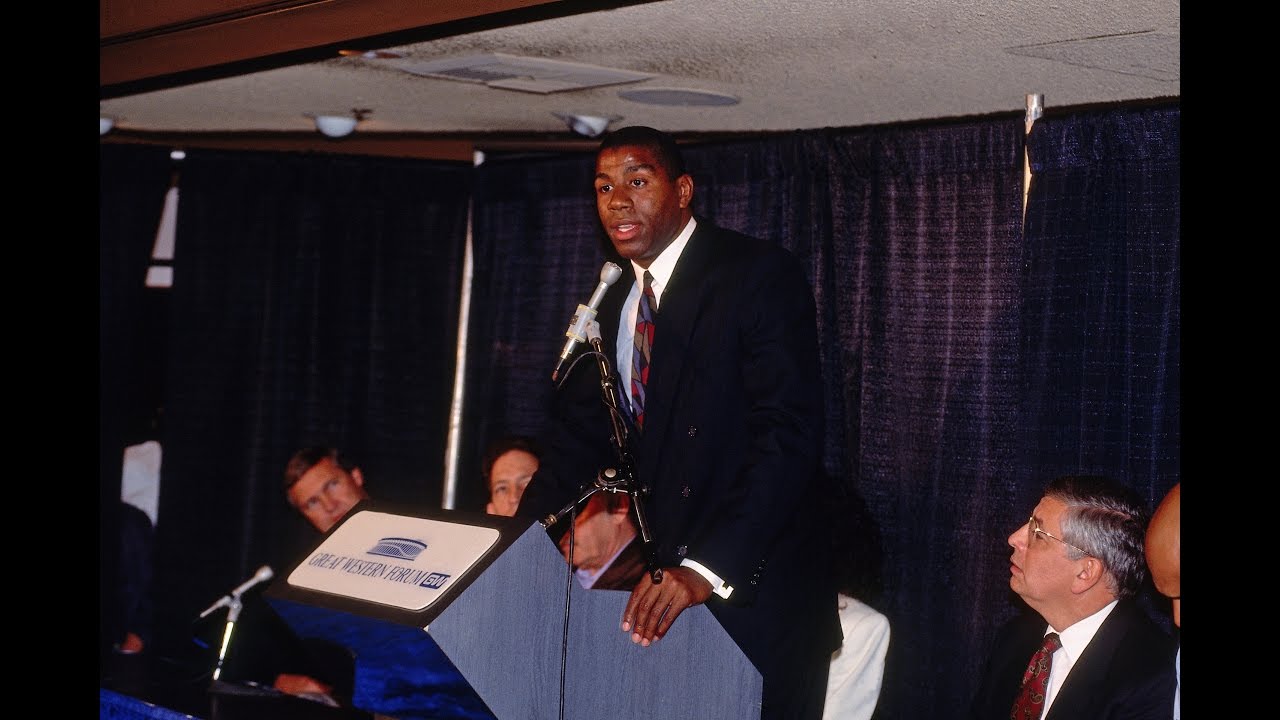 Nonetheless, the Centers for Disease Control and Prevention estimated that in 2018 black people accounted for 42% of new HIV diagnoses. USA TODAY recently reported that black people are dying of coronavirus at much higher rates compared  to other Americans in major cities. Johnson offered varying reasons that explain such a troubling trend.

Johnson decried the country’s lack of testing supplies and the varying logistical and financial hurdles it takes to receive one.

“We got to make sure first every American can get tested. Right now there’s a shortage of tests. People want to get tested but they can’t find a test kit,” Johnson said. “The problem is people want us to drive to suburban America to get that test. Why can’t you have that testing done right in urban America and right in the inner cities?”

“The lack of access to health care, that is an unbeatable combination,” Johnson said. “We need to get better. Hopefully there will be affordable health care for all people, not just for minorities but everybody. If the prices come down, then I think you’re going to see African Americans be a lot healthier.”

Lastly, Johnson pointed out that black people are more likely to be working in jobs considered “essential services” than those that allow them to work from home. That partly explains why Johnson has made investments on projects that focus on rebuilding inner cities and has raised funds to award college scholarships.

“We’re hardworking people,” Johnson said. “We want to take care of our family. But at the same time, we have to understand that the hospitality sector and restaurant sector are driven a lot by minorities, especially African Americans. We can’t just say it’s because they are in those sectors. We as African Americans have to do a better job. We have to make sure our kids can educate themselves so they can have jobs in other sectors. So we won’t be talking about this hopefully in the next five years.”

That largely depends on if doctors can find a vaccine for COVID-19.

“Until we come up with some drugs that can prolong life and help people beat the virus, we’re going to continue to have people passing away,” Johnson said. “That’s unfortunate. Here we are, the biggest and strongest country in the world, and we should be having drugs that can help people through this virus.”

There is no cure either for HIV or AIDS. Yet Johnson has lived with the HIV virus by keeping a strict daily routine. He prays and has a positive attitude. He works out. And he takes his medicine (he told the Los Angeles Times in 2011 that he takes three undisclosed pills twice a day). On CNN, Johnson added that he has taken what is known as the HIV cocktail. David Ho, Johnson’s physician and one of the preeminent doctors in the AIDS research community, is credited for coming up with the “cocktail” mixtures of protease inhibitors.

“That is what made me live now for almost 30 years,” Johnson said. “When I first announced HIV almost 30 years ago, there was only one drug in AZT. Now there are 30 drugs. Now people can live a healthy life because of those drugs.”

It remains to be seen how long it will take to find the right drugs to treat COVID-19. Until that happens, professional sports leagues might not be equipped to return to play.

Major League Baseball has suggested a proposal to hold games behind closed doors in Arizona. The NBA has considered a similar setup in Las Vegas. Lakers star LeBron James initially voiced his displeasure about playing games without fans but has since softened his stance.

“LeBron is right. It’s hard to play without fans,” said Johnson, who stepped down as Lakers president of basketball operations in 2019. “You play one game, you’ll adjust to not having fans there. We’ve all played our whole life on the playgrounds and in pickup games without fans being there. Basketball players will know how to adjust.”

Even if Johnson admitted he is “looking forward to see if the Lakers are going to win the championship,” he seemed more concerned about the COVID-19 pandemic than worried if sports will resume.

“I hope that happens. But first the players have to be safe,” Johnson said. “The numbers have to be stabilized. America and all of us who live in this great country we live in need sports, especially in a time like this. But only if everybody is safe.”