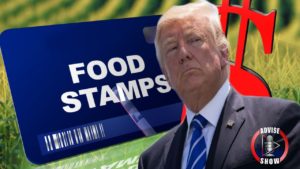 Trump is the Marie Antoinette of 2018. Never heard of her? She was the last Queen of France before the French Revolution and allegedly said “Let them eat cake until they all starve!” as the people of France were starving. Marie even wore flour on her wigs while many French people went without bread. In addition, her spending, which reportedly emptied France’s treasury, helped to spark the French Revolution. Well, with Trump’s latest stunt, he is basically telling the poor people of America to eat cake while he dons that cheap wig. Trump and Antoinette are two peas in a privileged pod.

According to Yahoo News, Trump wants to end food stamps and replace it with “non-perishable food items selected by the government.” The White House budget director Mick Mulvaney compared the food boxes to the start-up meal delivery company Blue Apron, which delivers food to people’s house and has reportedly been a disaster. The Department of Agriculture is calling the program “America’s Harvest Box,” which would be made up of “100 percent U.S. grown and produced food” and would include items like shelf-stable milk, peanut butter, canned fruits, meats and cereal. The Trump administration claims America’s Harvest Box will save the country 129 billion over 10 years.

here are countless issues with this America’s Harvest Box. How would these boxes be delivered? Is the government really going to deliver harvest boxes to everyone on food stamps? If there is some type of pick up location then it is nothing like Blue Apron or other meal-kit services. How far away will the pick up location be, what if some people do not have access, especially the disabled? Do we really trust the government with selecting food? Not everyone can eat the same food or eat the same portions. More people will go hungry on this horrible plan. As far as the budget, why not end the fight for a $20 billion wall that is pointless — considering most illegals are here from overstayed visas.

America’s Harvest Box is coded language for Trump and the Republicans to completely end social services, which he repeatedly promised he wouldn’t do. Again, let them eat cake until they all starve.