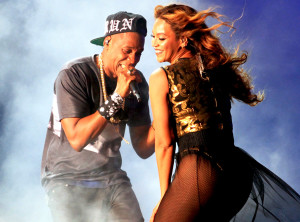 Did Jay-Z really cheat? Or is the whole thing a big money-making scheme? Well, according to some reports, the superstar couple made a joint decision to make up rumors about their marriage to sell more copies of Beyonce’s most recent album, “Lemonade”. And its working!
According to Billboard.com, the album will soon be taking the number one spot on the Billboard 200 chart, and has already sold more than 500,000 digital copies sold with an equivalent of 700,000 units (including the amount of times the album has been streamed). For the music industry these days, that’s a huge accomplishment!

One big marketing scheme?
On the album, there are a few songs that feature lyrics suggesting that Jay-Z was unfaithful to her during their marriage. Industry experts, however, are now saying that this is just a clevery marketing strategy. One source told The Daily Star: “Jay is a very smart businessman and was involved in the creation of Lemonade. He knew every song Bey was going to release. He knew the lyrics – he knew the implications. He had to approve the songs before release.”
“The bottom line is that they are both really smart,” he added.

Physical album not even released yet
And smart they are! “Lemonade” was initially released on April 23rd (exclusively through Tidal) and sold a half-a-million copies in less than 2 weeks. A film, also called “Lemonade,” was simultaneously released with the album and premiered on HBO. By Monday, April 25th, the album, bundled with the film, went on sale through other digital retailers. A physical version of the album will be released worldwide on May 6th.
And on top of all that, Beyoncé’s Formation World Tour kicked off on April 27th in Miami, and is already sold out in most cities.