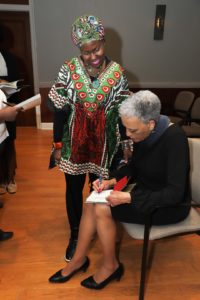 The Cummer Museum of Art and Gardens has been at the cultural center of Jacksonville’s art community for decades. The museum has consistently shown diversity showing local and national minority artists from various genres.

Recently, the Cummer hosted a conversation with distinguished guest speaker, Johnetta Betsch Cole, Ph.D. – a native of Jacksonville with a resume that boasts stints as an anthropologist, educator, museum director, and college president.

The talk focused on diversity and inclusion in museums, which many feel is a topic that is well worth the dialogue.  For years, minority artists were not properly represented in major museums, and there is a growing movement to correct those inequities across the national museum spectrum.

The dialogues were scheduled for two days and featured book signings for Cole’s plethora of books designed to empower and prepare women to break corporate glass ceilings.

The Jacksonville Chapter of the National Alumnae Association of Spelman College was well represented at both events. Spelman alumnae proudly supported their former President as Cole was the first female African-American president of the school. She was president of Bennett College from 2002 to 2007. From 2009–2017 she was Director of the Smithsonian Institution’s National Museum of African Art.

She is also the granddaughter of Abraham Lincoln Lewis, Florida’s first black millionaire, entrepreneur and cofounder of the Afro-American Industrial and Benefit Association.

Shown is Cole signing her book for guest Raquel Bolden-Lott