By Sherry Oliver and Nubian Roberts

19 years ago, I never would have imagined that life after prison could be as hard as being incarcerated. I have been in and out of the criminal justice system since I was 14 years old, and most recently served a sentence of 13 months.

When I was released in 2015, I was excited to get back to my family and start to rebuild my life. But I slowly realized that my incarceration still had a hold on me. While trying to get my driver’s license I was denied due to debt. I never knew I owed money. I was told to go to the courthouse and there I found out that I owed $800 in fines and fees.

Without a job, a car or savings, I couldn’t pay right away, and in a matter of weeks my balance went from $800 to a staggering $2,000 without anyone notifying me.

Through my work with the Dignity Coalition in Jacksonville, we found that recent legislation requires courts to refer the existing debt to collection agencies, which can add up to a 40 percent surcharge. I was devastated and concerned that I would never be free of “the system.” How could I possibly hit a target that is constantly moving?

There are activists, legislators, and community leaders like Nubian Roberts, New Florida Majority’s North Florida Criminal Justice Organizer, who understand that criminal fines and fees are unfair and hurt low-income communities the hardest.

Nubian told me that fines and fees are the second form of incarceration and criminalize poverty. They’ve created a two-tier system of justice where poor people – and particularly communities of color – are disproportionately punished.

According to the Fines and Fees Justice Center, over the past three decades, “Florida has created more than 20 new types of fines and fees, marking what might be the largest increase in court costs nationwide—and Florida funds its court clerks almost entirely from fines and fees. These fines and fees are not small, and the criminal justice system creates loopholes to keep returning citizens in debt.

Florida suspends driver’s licenses when someone can’t pay their fines and fees, which sets up people for a vicious cycle of “driving with a suspended license” convictions. These license suspensions and policies serve to punish someone for not paying, and takes away a person’s ability to be independent and successful.

That was happening to me.

My fines are a mix of restitution and a lien is constantly being placed on my fines and fees, which makes the balance increase. The interest is so high, I am not sure how anyone is expected to pay a balance that continuously changes. My fees are very likely increasing right now as you read this. And there are no programs or payment plan options in place to help returning citizens pay back fines and fees.

It’s hard for me to move further along in life than I am now because of my fines and fees. It is no use in trying to build credit, purchase a home or a car because of my debt. I work two jobs just to pay what I can, but I still have to support myself with unexpected costs and bills.

Last year, I volunteered with New Florida Majority collecting signatures to get Florida’s Amendment 4 on the ballot, which automatically restored voting rights to people with felony convictions (except murder and sex offenses) who have completed their sentences. When it passed, I was among the 1.4 million Floridians who were going to be able to vote again.

In April, I registered to vote and cast a ballot in Jacksonville’s municipal elections the following month. But then, Republican legislators passed a bill saying that returning citizens like me had to pay all our pending court fees and fines first in order to be eligible to vote.

When Governor DeSantis signed the bill into law, just like that, I lost my right to vote once again. I’m not the only one. 80 percent of those 1.4 million Floridians were disenfranchised by that stroke of the Governor’s pen.

Roughly a million Floridians with felony convictions have court debt. Some owe hundreds of thousands of dollars. They can try to appeal to the courts to convert it to community service hours, but it requires hiring a lawyer with money that we just don’t have.

Court fines and fees can start out to be so small, but affect a big part of your life. It seems like every piece of freedom I got was taken away. But I’m not giving up.

Since my release, I became a founding steering committee member of the Dignity Florida Coalition, I have collected nearly 200 pledge cards for criminal justice reform, participated in Dignity Day at the Capitol, and worked with other formerly incarcerated and impacted women to expose and address the mistreatment of women and girls in the Florida Department of Corrections. Recently, we won the Dignity for Incarcerated Women Act (SB 332 and HB 49), which guarantees incarcerated women access to feminine hygiene products and protection from abuse.

I have worked with progressive organizations including New Florida Majority (NewFM) to help bring awareness to issues and help educate the Jacksonville community. As a member of NewFM’s Voter Registration team, I helped register returning citizens to vote, and canvass in the community to stress the importance of registering to vote and ensuring that our voices are not silenced.

Every person deserves the right to be treated fairly and with dignity. I will continue to work and fight for my rights and I want others to know that they are not alone. 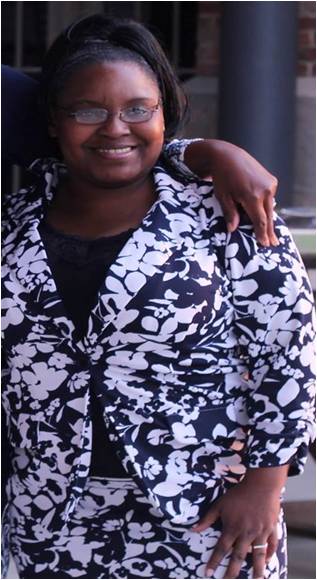 Sherry Oliver is a resident of Jacksonville and student, Formerly Incarcerated and Dignity Florida Leader